I vividly remember making some sort of foolish stand in secondary-school by refusing to buy a Nokia 3330 unlike everyone else in my class.

I've no idea why I opted for such a meaningless display of teenage rebellion but this decision seems quite ironic now because my bloody smartphone has taken over my life. 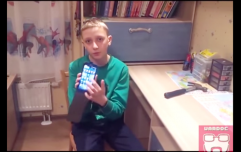 Video: This kid's face after he breaks his own phone with a hammer is priceless

END_OF_DOCUMENT_TOKEN_TO_BE_REPLACED

I'm not the worst though because we all have a friend that thinks a dead battery is the equivalent of being a 14th century merchant that's sailing around the world without a map or a fecking clue what they're doing.

This lady in Hong Kong definitely seems to fit into the above category after she threw a tantrum for the ages after her battery died.

This video is for anyone you know that can't live without seeing their texts, tweets, Facebook messages and news.

popular
WhatsApp introduces way to choose who can and can't see you're online
Nearly 100 flights delayed at Dublin Airport on Monday
RTÉ tries to solve Michael Collins murder in new documentary
QUIZ: Can you get top marks in this short but tricky Irish geography quiz?
Motorcyclist in his 30s dies following two-vehicle collision in Kerry
Family of Ashling Murphy share heartbreaking tribute at Fleadh Cheoil
Netflix has just added an incredibly tense 97-minute thriller
You may also like
1 month ago
Doctor reveals why couples should always sleep in separate beds
10 months ago
"Only in Dublin" - Viral clip sees three men remove sofa from window with sweeping brushes
11 months ago
Kids pull "Bart Simpson" style prank on school board in brilliant viral clip
1 year ago
WATCH: The incredible lengths this Irish dad is going to for his "miracle" daughter
2 years ago
WATCH: Would you give in to the toughest GAA fan temptation?
3 years ago
WATCH: TV Presenter Mairead Ronan tries to guess the mystery car
Next Page