This is taking it to the next level...

Vine is one of our favourite apps on the planet because it's so snappy, you get to the point or the funny in six seconds and there's no messing around. Also, some of the more creative people can do stuff like this... 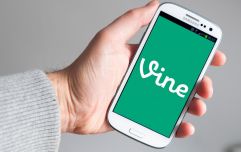 END_OF_DOCUMENT_TOKEN_TO_BE_REPLACED

Vine have announced some new features today designed to make it easier to shoot and edit videos from your phone and they will take the app to a new level.

The biggest change is that people can take existing videos they already have on their phone and use them for Vines. In the old system, the only option was to recorded your video on the app. The new feature allows you, for example, to take a video of you belting out a Bruce Springsteen classic and cutting it down into a six second Vine, it's simple but genius.

Other new features include a focus-lock feature for the selfie camera, editing features like a duplicating button that lets you repeat a shot, a mute button to wipe out audio, and a “torch” mode, which turns on your phone’s flash so you can shoot in the dark.

The new Vine is out for iOS today, and the Android version is "coming shortly".

The new Vine Camera from Vine on Vimeo.

Advertisement
House of Rugby Ireland · Quinn Roux on finding a home in Ireland and Mike McCarthy brings the absolute HEAT!
popular
OFFICIAL: Peaky Blinders will end after the sixth season
The JOE Movie Quiz: Week 85
Joe Biden inauguration rehearsal paused as Capitol building goes into lockdown
QUIZ: Name all the countries of the EU that contain 2 vowels or less
Eight more people with Covid-19 have died in Ireland, 2,121 new cases
Garda issue warning about courier payment scam
QUIZ: Can you name the Marvel Cinematic Universe film from just a single screen shot?
You may also like
3 years ago
Who is Logan Paul?
4 years ago
Pornhub offers to buy Vine claiming "six seconds is more than enough"
4 years ago
WATCH: People are mourning the loss of Vine by sharing some of their favourite ever clips
4 years ago
RIP Memes: Twitter announces it is discontinuing Vine
5 years ago
VINE: Sheffield Wednesday have scored a goal that's so beautiful it would make Messi jealous
5 years ago
Vine: A funny giraffe telling a joke has won the Australian Vine Film Festival
Next Page