WATCH: Footage of MIT's robotic 'Mini Cheetahs' proves that the end is nigh

Has nobody seen Black Mirror? THIS IS HOW THE WORLD ENDS.

Before you look at this video, we have a question. Have you seen the 'Metalhead' episode of Black Mirror?

If you haven't, let us enlighten you.

It depicts a world where civilisation has been destroyed by robotic dogs, who seem to be programmed to kill everything in sight.

The dogs in the episode were influenced by similar creations in real life, like the Boston Dynamics BigDog, and if we're honest, it's a little bit too real for our liking.

MIT’s Biomimetics Robotics department took a whole herd of its new ‘Mini Cheetah’ robots out to showcase what they can do, and the results are absolutely terrifying.

We see the 'Mini Cheetahs' being able to follow instructions, and do things like flip on command. They can even play football. 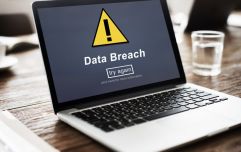 END_OF_DOCUMENT_TOKEN_TO_BE_REPLACED

The robots can run up to five miles per hour, which may not sound too fast, but we really wouldn't fancy getting a chase off it either...

Not terrified yet? Well, you should probably know that they can walk both right-side up, and upside down. UPSIDE DOWN.

We will admit that they are actually a little bit cute though. Maybe Black Mirror has just warped our vision.


popular
Downton Abbey creator confirms plans to start work on a sequel
QUIZ: How many of these characters from Breaking Bad can you name?
QUIZ: How many of these Recess characters can you name?
The 50 most iconic songs of all time* have been revealed
Disney+ has brought forward its launch date in Ireland and confirmed its price
WATCH: Trailer released for CG remake of Pokémon: Mewtwo Strikes Back
20 employees in Cork suspended from work for their Christmas party behaviour
You may also like
2 years ago
An AI Bot has written a Harry Potter story and it's even better than the real thing
1 month ago
Twitter to remove inactive accounts and free up usernames in December
1 month ago
Belfast company launches headset designed to improve your sleep
1 month ago
REVIEW: Fitbit Versa 2 - A great fitness tracker with some smartwatch additions
1 month ago
Sacha Baron Cohen says Hitler would have been allowed to buy anti-semitic ads on Facebook
1 month ago
OnePlus users warned their personal information may have been accessed in data breach
Next Page