Can you guess who the highest-earning manager in the world (by far) is?

Not only does he earn the big bucks, he earns just short of seven million euros more per year than his nearest competitor. That’s sure to put a Pep in his step.

That’s right, according to Brazilian sports business company Pluri Consultoria, Bayern Munich manager Pep Guardiola is the highest-earning football manager in the world on €17 million per annum, which works out at just under €1.5 million a month or around €327,000 a week. Nice work if you can get it alright.

While it will come as little surprise that Guardiola is the world’s best-paid manager, the real shock is that, according to this research at least, he earns almost seven million euros per year more than his nearest competitor, Jose Mourinho, who pulls in just over ten million a year at Chelsea. Peanuts, we think you’ll agree. 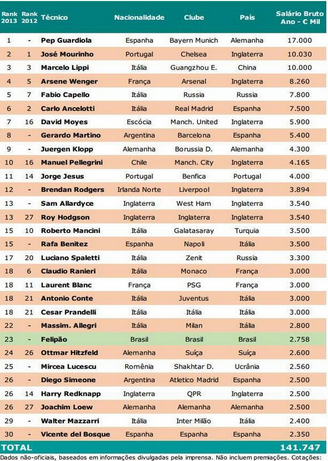 Arguably the most surprising thing about the list is the presence of Big Sam Allardyce in 13th (€3.54 million per year), while Vincente del Bosque’s position in 30th on a salary of €2.35 million per year suggests that Eamon Dunphy’s recent comments about the Spanish boss earning fifty grand a year were either way off the mark or the European Championships and World Cup winning coach has got a massive pay rise in the last few months.

popular
Harvard study reveals how many times men should ejaculate each month to stay healthy
Parents left in shock after gorillas start mating in front of kids at zoo
Colin Farrell shouldn't win the Oscar this year
Conor Mcgregor hit by car ‘at full speed’ while cycling
The JOE Friday Pub Quiz: Week 331
Man wins $1m on lottery ticket after someone pushed in ahead of him in queue
Close call as Paul McCartney tries to pose on Abbey Road crossing
You may also like
4 years ago
Comedian accused of racially abusing German defender Jerome Boateng with blackface sketch
5 years ago
Xabi Alonso confirms what we already knew was coming with one typically classy picture
5 years ago
WATCH: Carlo Ancelotti response when asked about Seamus Coleman transfer caused a lot of laughter
5 years ago
WATCH: Roy Keane went full Roy Keane in his brutal analysis of Arsenal last night
6 years ago
Here's why Oktoberfest is celebrated in September
6 years ago
Bayern Munich perfectly shut down this sexist troll on Twitter
Next Page