Dublin Decider: The exciting new faces at Liverpool and Celtic

Both clubs have been busy in the transfer window, so here’s a quick guide to a few of the new names on the books of Liverpool and Celtic.

As always, Liverpool and Celtic have both been pretty active in the transfer window so far. Celtic saw a few big names leave (Gary Hooper and Victor Wanyama being the most important) while Liverpool had Jamie Carragher retire and Jonjo Shelvey departed for Swansea.

To fill those gaps, and to improve the squad depth both Brendan Rodgers and Neil Lennon have nabbed some exciting looking players. Here’s a few to look out for.

Iago Aspas: Signed by Liverpool from Celta Vigo for £7m, the striker has been given the No 9 shirt and if, as now looks likely, Luis Suarez leaves then he will be Liverpool’s chief striker.

He only made his top flight debut in Spain last season but the 26-year-old scored 11 La Liga goals for a struggling Celta Vigo side. Already looking pretty handy in pre-season, Aspas could be a very big name by the end of the 2013-14 season. Check out his best bits here.

Luis Alberto: The Barca graduate (below) is only 20 but he has bags and bags of potential. Able to play up front or on the wing, he has an eye for goal too. The transition from the Spanish second division to the Premier League may take a little while but for £6.8m he could be a real steal if he continues to develop. 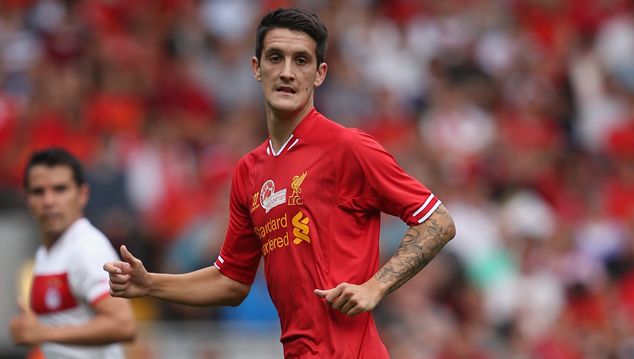 Virgil van Dijk: Neil Lennon is a shrewd operator in the transfer market and we reckon he has picked up another bargain in Virgil van Dijk. The rangy defender cost £2.6m to prise from Groningen and the 22-year-old looks to have all the tools a centre-half needs.

Tall, physically strong and more than comfortable on the ball he has already played for the Dutch U21s. A transition to the full senior team can’t be too far away. A foot injury stopped him playing in the SPFL opener on Saturday but when he returns he should be a very formidable defensive presence. Check out a video of him in action here.

Amido Balde: The giant striker (main pic) has a big job to do to replace Hooper but his form last season in Portugal is encouraging. Nine goals in 27 games is a decent return and at just 22, he should get better and better. Standing 6’4” he is an aerial threat and he covers the ground pretty quickly too. He already has a goal to his name in pre-season so keep an eye on him at Aviva Stadium on Saturday.

popular
Amazon Prime Video has just added 16 big movies to its library
QUIZ: We bet you can't get full marks in this extremely frustrating geography quiz
"It will be with me until I die" - Charlie Bird opens up about "loveliest gesture" from Daniel O'Donnell
Ireland tells Russia that naval exercises off Irish coast are "not welcome"
One person killed and three wounded in lecture hall shooting in Heidelberg
A new law now prevents employers using tips to ‘make up’ rates of pay on contracts
The JOE Movie Quiz: Week 138
You may also like
2 months ago
Police issue warning over CCTV footage of Liverpool bomb explosion
2 months ago
Liverpool bomb declared a terrorist attack as police confirm fourth arrest
2 months ago
Liverpool bomb: Taxi driver "locked bomber inside car" after spotting explosives (Report)
1 year ago
Gini Wijnaldum shares his favourite gym exercises for building abs of steel
1 year ago
Armed police close gym near Liverpool after owner refused to shut doors
1 year ago
Jurgen Klopp sends brilliant letter to 10-year-old Manchester United fan from Donegal asking him to stop winning
Next Page