Fantastic image of the Tromso stadium where Spurs will play tonight

It could be a winter wonderland for AVB and his men tonight in Europa Cup action, or it could be a bleak trip home from Norway, but either way, there is no doubt it is a spectacular setting.

Reeling from their 6-0 humiliation at the hands of Manchester City, Spurs have the sanctuary of the Europa League to get their season back on track, but if they thought the reception from their fans might be a bit cool after the disaster at the Etihad, it pales into comparison of Tromso’s Alfheim Stadium.

Located in the Arctic Circle, the 6,000 seater stadium with synthetic surface will be a little on the chilly side tonight, though Tottenham have already secured their qualification for the final 32 of the competition.

James Dart has tweeted a brilliant picture of the stadium lit up in the snowy surroundings before tonight’s kick-off. 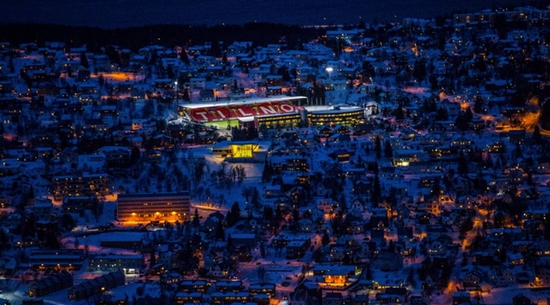 House of Rugby Ireland · Quinn Roux on finding a home in Ireland and Mike McCarthy brings the absolute HEAT!
popular
20 of the best comedies to watch on Netflix right now
The JOE Friday Pub Quiz: Week 227
The 50 most iconic songs of all time* have been revealed
The JOE Movie Quiz: Week 85
QUIZ: The JOE Music Quiz: Week 41
Yewande Biala releases statement discussing racism on Love Island
PICS: The man with the biggest penis in the world has one unbelievable problem with it
You may also like
1 day ago
Snow and ice warning issued for 13 counties ahead of bitter weekend
1 day ago
Accumulations of snow in many areas forecast as temperatures set to drop below freezing
2 weeks ago
Snow, ice and low temperature warnings issued for all of Ireland
2 weeks ago
Ice and low temperature warning issued for 14 counties
3 weeks ago
Snow and ice warning issued for three counties as cold snap continues
1 month ago
Status Yellow snow warning issued for five counties
Next Page