According to reports, the UEFA Executive Committee has handed down a new set of orders to refs in Europe.

Taking down the last man or denying a goal scoring opportunity will no longer be a red card offence, according to a new mandate from the UEFA Executive Committee. Spanish newspaper AS are reporting that the group met in Bilbao on 12th December, and decided that the punishment was too excessive. The official UEFA report states that they reiterated their desire to see it changed, but AS report that Platini has already given the refs new instructions.

It has often been referred to as a "triple punishment", whereby the player is sent off, a penalty is awarded, and he serves a ban afterwards, and president Michel Platini wanted to see the end of that tradition, stating in the same newspaper last month that the penalty would be punishment enough. The rule change has already been seen in effect this weekend in La Liga, where Cristian Sapunaru of Elche was not sent off for his foul on Cesc Fabregas. 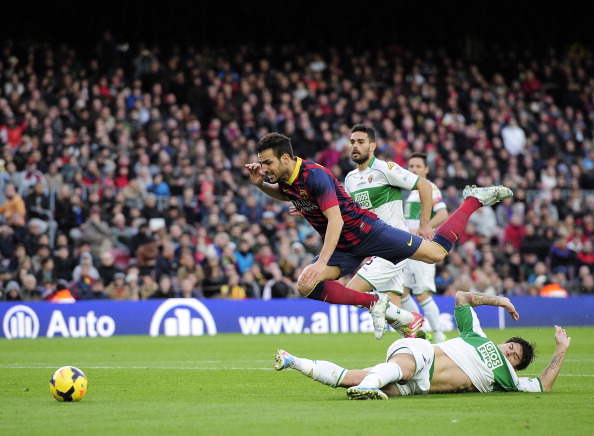 The new plan is for referees to award the card that the challenge would merit were it to have taken place anywhere else on the field, so dangerous tackles will still be punished with a red. The example that AS gave was that of elbowing someone in the box, which will see a red card issued. There has been no clarification yet on whether or not a cynical foul outside the box would still result in a red, but we'll bring you more on that when we have it.

The rule change will also affect goalkeepers, who will no longer be sent off for bringing down a player as they lunge at his feet to collect the ball, so that may mean even less time on the pitch for backup 'keepers. Platini has asked that FIFA consider amending the rule themselves at the next meeting of their board in March, but UEFA have already implemented the changes.

popular
Jackass star Bam Margera reportedly hospitalised with pneumonia and put on ventilator
The JOE Friday Pub Quiz: Week 324
The "eighth best movie ever made" is among the movies on TV tonight
A Place In The Sun's Jonnie Irwin takes son to see Santa after terminal cancer diagnosis
One of the best films of all time is among the movies on TV tonight
Jennifer Lawrence sparks controversy by saying she was the first woman to lead an action movie
Mia Khalifa claims seaside town is better than Miami
You may also like
3 days ago
World Cup 2022 Day 17: All the major action and talking points
3 months ago
Irish person dies after drowning in Spanish resort swimming pool
4 months ago
Apocalyptic scenes as train grinds to a halt in the middle of blazing wildfires
4 months ago
Irish man in intensive care following shooting in Spanish nightclub
5 months ago
Ryanair cabin crew in Spain announce 12 days of strikes in July
9 months ago
Irish teacher reportedly stabbed at Spanish school by 13-year-old pupil
Next Page