"Going home in the dark and everyone is asleep… you have to wonder… are we mad?" JOE's interview with KillBiller founder Shane Lynn

Over the coming weeks we'll be interviewing each of the eleven finalists taking part in The AIB Start-Up Academy.

This week we caught up with Shane Lynn, founder of KillBiller, to find out what it's like to be part of an Irish tech start-up and the key pieces of advice he has been given so far in his career.

KillBiller is a mobile app that finds the best mobile plan for you. By analysing individual phone usage against all of the plans available from Irish mobile operators (now over 150), KillBiller helps to find the best value plan for its users.

The app takes details of the calls, messages and data used by you on your phone and, based on this, works out exactly how much you would have spent on each plan from every network.

The app lets you compare every option, choose a new plan, switch to a new network, and save potentially hundreds of euro per year.

You can check out our interview with Shane below.

What prompted you to start your business?

Shane Lynn: The idea for KillBiller came about when one of us was looking to change mobile plan. Absolutely lost in a sea of documentation from about six different shops, we reckoned that there should be an easier way… and so we made it! We wanted to learn the ropes and make a simple way for people to compare mobile plans and decide on the best for them. KillBiller started as a hobby, but it struck a chord with Irish people, so it has changed into a business!

Why did you choose to go into the tech industry? What research did you undertake before starting out?

SL: The entire founding team of KillBiller is a nerd team so tech was the natural choice. There’s two PhDs in computer engineering between us, and a load of tech knowledge and love (...for tech… not each other).

We started on a part-time hobby basis, working evenings and weekends, slowly learning the ropes, making the app, and working on the maths. We were fairly certain it was all coming together by the time we pressed go on full-time operations!

What did you do to make you stand out from the competition?

SL: For The AIB Start-Up Academy, the level of competition was really high. To make sure we stood out, we worked very hard on a snappy, factual, and professional pitch deck that really emphasised the public demand for KillBiller that we’ve seen, and showcased our work so far. Combining this with our devilishly charming presentation skills, we went in with a positive attitude and hoped for the best!

What is your USP? How did you decide to market your USP?

SL: KillBiller is unique amongst other phone comparison services because the results you get are tailored EXACTLY to you. We work out, to the penny where possible, how much you and only you would have spent on every plan by looking at precisely how you have used your phone.

You don't even have to look at a calculator. No one else out there offers this service in Ireland. KillBiller gives people confidence knowing they are moving to the best mobile plan to suit their needs.

What has been your biggest barrier since starting up KillBiller?

SL: The initial barrier to KillBiller taking over the world was getting the app built.  When you’re working full-time, writing a bit of code in the evenings is hard to do and we had to sacrifice many nights of Sherlock Season III and Love/Hate. At the moment, the current challenge is getting the word out there - there’s no use making a brilliant app that no one knows about! We’re slowly turning into marketeers. Have you seen Billy our KillBiller Teddy? 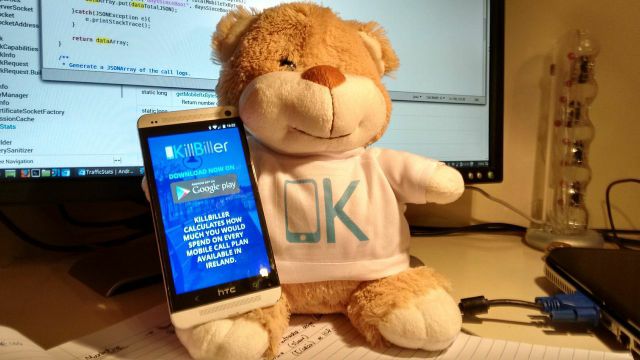 Have you had many mentors? What has been the best advice they have given you?

SL: We’ve met some great people over the last few months, it's been amazing in Ireland the number of people willing to give advice and help out. The AIB Start-Up Academy and the Enterprise Ireland New Frontiers programmes have been invaluable. Of those that we’ve taken advice from so far, the best elements were:

What has been your greatest moment since starting up?

SL: Some of the best moments were when we first started to get users in Ireland for KillBiller. We were mentioned on the radio a few times without any warning and our first clue was when all our computers broke and the email sign-ups started flooding in. It was a super feeling. We’ve since fixed up the computers to handle big traffic increases, and we reckon that these are great problems to have!

SL: The odd 2-3 am pitch deck perfection session when there are important presentations to be made. When you’re going home in the dark and everyone is asleep… you have to wonder… are we mad?

What’s the bravest decision you have had to make in business so far?

SL: Getting the app out there early was something that we found hard to do. We are all techies at heart, so we were tempted to add more features and functionality to 'perfect' it before it got released, but we made the decision to get it out early and before the iPhone version was ready. In hindsight, releasing early has allowed us to make a bunch of changes based on user feedback and really improve our business model without investing too much time up front.

What are your three pieces of advice you would give to somebody starting off?

The key piece of advice that I would give is to take your time and don't be afraid to start small. The sentiment “Rome wasn’t built in a day” has never been more true. Success comes after hundreds of days of drudgery that no one ever sees and overnight success just doesn’t exist.

A second one I’d say is not to be secretive with your idea. If someone can copy your idea just by hearing it off you, its probably not a viable business. And how can you get feedback without talking about it?

What Fortune 500 company would you MOST like to be in charge of?

SL: Boeing. Private jets for everyone! We don't have to be good at running the new company, do we?

What Fortune 500 company would you least like to be in charge of and why?

SL: McDonalds. We’d look no good in the yellow and red pants. Though I suppose we’d be willing to give it a shot.

What are your “cheats” or “hacks” for making life easier in the business world?

Talk - Talk to everyone who will listen, build your network, and share the highs and lows with others going through it.

Stay healthy - It's not all work, make the time for family, friends, and keeping fit!

Sleep - There’s nothing I like more than a good 10 hour kip. How fantastic do you feel after that? And it's free! Amazing.

Who would you prefer to face off with in a fight to the death: Bill Gates or Donald Trump? Keep in mind that the winner keeps the loser’s business…

SL: I think we’ll take Bill any day. Doesn’t look like much of a fighter while Donald is packing some pounds. Also, when we win… I think we’d be better with Bill’s computers than we would with Donald’s property empire!

popular
Irish employment law experts warn employers must find ways for staff to take entitled leave
First photos emerge of Boris Johnson drinking at Downing Street party during lockdown
RTÉ's new show is looking for the best takeaway in all of Ireland
EXCLUSIVE: Ewan McGregor and Hayden Christensen on reuniting on the set of Obi-Wan Kenobi
Ryanair steward arrested after being caught on camera drinking during flight
One of 2022's funniest movies has just been added to Netflix
You may also like
5 years ago
MMA coach John Kavanagh compares starting a business to the fight game
6 years ago
JOE speaks to AIB Start-up Academy finalist, Topper Technology
6 years ago
JOE speaks to the entrepreneur behind great Irish startup Laundrie
6 years ago
This new Irish business is designed to help musicians and bands everywhere
6 years ago
Great news on the job front as tech giant creates 450 jobs in Dublin
6 years ago
INTERVIEW: JOE talks with James Murphy - Co-Founder of Impact Gumshields
Next Page