The Reds are currently five points ahead of the London side at the top of the table and know that a win will rule Chelsea out of winning the domestic title this season.

Mourinho said that he will rest a number of key players ahead of the Champions League semi-final, second leg against Atletico Madrid next Wednesday but Liverpool’s record goalscorer does not believe that the Portuguese is being genuine.

Liverpool’s all-time record goalscorer, speaking at the Aviva Stadium ahead of Liverpool’s clash with Shamrock Rovers on May 14th, said: “Brendan won’t fall for that.

“At the end of the day we just concentrate on what we’re doing. In the last few months Liverpool haven’t changed anything and there’s no need to change things now, so Liverpool just concentrate on their own game one game at a time and just see how the game goes. It’s going to be so difficult to beat Chelsea.

“If I was a Chelsea supporter I’d be disappointed. If you’re paying to go to Liverpool you want to see your best team out there.” 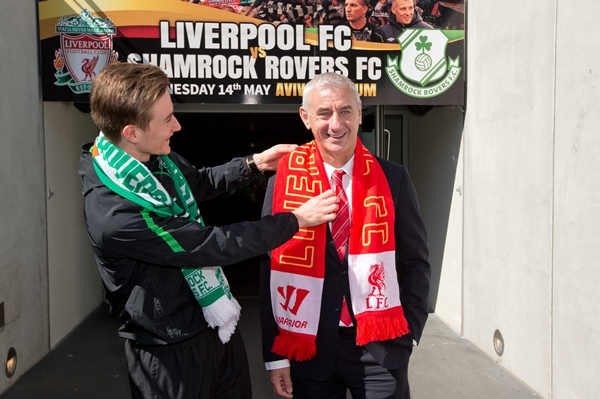 Rush added: “No matter what team Chelsea put out we know they’ll be very difficult to beat. I think tactically they could put a youth team out and they’d have been difficult to beat. Chelsea have got the squad to compete in the Champions League and the league.

Rush paid special tribute to Luis Suarez after a season in which the Uruguayan turned the Anfield support in his favour, following last summer’s infamous flirtation with Arsenal.

“I think he’s matured, I think he knows what it’s all about. At the start of the season I thought the owners and the manager handled the situation really well. There’s no-one bigger than the club and I think he’s put his head down, he’s worked really hard and he’s repaid the fans.

“He is, without doubt, the player of the year and you can see in him that he’s enjoying playing his football now. The supporters love him as well and that goes a long way.”

Suarez has, of course, been linked with a move away from Liverpool again this summer – with Real Madrid known to be keen – but Rush feels that the fact his side has secured Champions League should guard against any potential suitors.

“I think, if Liverpool did win the league, why can’t Liverpool be looking at Real Madrid’s players? Why would he want to leave? He’s in the Champions League. We need people like Luis Suarez if we’re going to be successful next year.”

Liverpool FC v Shamrock Rovers takes place in the Aviva Stadium on May 14th. There are still a number of tickets available through the FAI website or Ticketmaster.

The Big Reviewski || JOE · Mortal Kombat director Simon McQuoid and new Sub-Zero star Joe Taslim on fatalities and fight scenes
popular
Everything you can do from tomorrow as biggest easing of restrictions in months to take place
Public warned over largest infestation of Portuguese Man o’war in Ireland over 100 years
QUIZ: Can you identify the EU country of origin from these €1 coins?
Taoiseach Micheál Martin has received his first dose of Covid-19 vaccine
The JOE Movie Quiz: Week 101
The JOE Music Quiz: Week 56
QUIZ: Can you list the 32 counties of Ireland in order of population size from largest to smallest?
You may also like
6 months ago
Gini Wijnaldum shares his favourite gym exercises for building abs of steel
6 months ago
Armed police close gym near Liverpool after owner refused to shut doors
1 year ago
Jurgen Klopp sends brilliant letter to 10-year-old Manchester United fan from Donegal asking him to stop winning
1 year ago
Seán Cox will move to England as he steps up his rehabilitation programme
1 year ago
Woman gives birth during Pink gig, names baby in her honour
1 year ago
QUIZ: How well can you remember the 2018/19 Premier League season?
Next Page