We continue our previews of this year's GAA Football Championship with a look at the teams from Connacht.

Key Man: Paul Conroy - A strong, powerful performer and one of the sweetest strikers of the ball in the country, Conroy is equally adept at midfield or in the forward line and has started to come into his own in recent seasons.

Young Player: Shane Walsh - The star of Galway's All-Ireland winning under-21 side last year, Walsh has long been touted as a serious prospect in Galway football circles and this season might be the time for him to make an impact on the senior side.

World Cup Twin: France - Both hugely successful around the turn of the millennium and both have huge tradition, but a return to the glory days seem a long way away at the moment.

Sky Sports Celebrity Pundit: Gráinne Seoige - Might be more suitable as a presenter than a pundit, but either way, she's adept in front of a camera, comes from an area steeped in GAA and, let's face it, isn't bad to look at either. If she's not available, Síle wouldn't be a bad alternative.

JOE's Prediction: Round Two of the qualifiers

Key Man: Emlyn Mulligan - Much like Declan Browne back in the day, there's not a forward line in the country that would not be improved by Mulligan's presence; he really is that good.

Young Player: Donal Wyrnn - Impressive at midfield for the under-21s, he has been trusted at full-back for the meeting with Roscommon this weekend.

World Cup Twin: South Korea - Both had mass neutral support when causing a shock against far bigger sides (Leitrim 1994, South Korea 2002), but it's hard to see them causing too much of an upset this year.

Sky Sports Celebrity Pundit: Colm O'Rourke - The RTE pundit might be Meath through and through nowadays, but he was actually born in Aughavas. Turncoat.

JOE's Prediction: Round One of the qualifiers

Last year was a fairytale as they reached the Connacht Final but it's hard to know if they can repeat those heroics this year. They Galway in the opening round in Ruislip and that's got shock written all over it.

Key Man: Lorcan Mulvey - London's first All Star nominee and their talisman is expected to be fit for the opening round after an injury hit season so far. 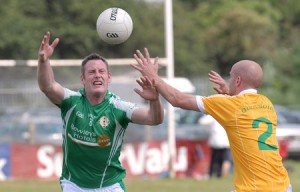 Young Player: Michael Walsh - The youngster was on the Mayo panel last year so a lot is expected of him in his first season with Paul Coggin's side.

World Cup Twin: Ivory Coast - We've gone with the Africans because they're the last team on our list and their key man Didier Drogba, who'd make a great full forward, played in the English capital for many years.

Sky Sports Celebrity Pundit: The Queen - JOE is led to believe she's now fluent as gaeilge since her trip to Ireland a few years ago. Elizabeth would bring real class to proceedings.

JOE's Prediction: A Connacht semi final defeat to Sligo and we see them falling at round 2 of the qualifiers.

Key Man: Aidan O'Shea - On his day, the Breaffy man is the best midfielder in the country and if he has another big year - he faded slightly after his Tour de Force against Donegal last season - then, whisper it, but Mayo might finally go all the way.

Young Player: Diarmuid O'Connor - Not much can really be read into his Championship debut against New York, but Cillian's younger brother was a star of the All-Ireland winning Mayo minor side last year and will push hard for a regular starting berth in the months ahead.

World Cup Twin: Uruguay - Tasted ultimate glory in the 1930s and 1950s and although it's been a long and painful wait, both are capable of going all the way this year.

Sky Sports Celebrity Pundit: Enda Kenny - Bertie did the Premiership back in the day, so who's to say Enda won't make an appearance on the Sky couch this summer. His father is an All-Ireland winner and by all accounts, he wasn't too bad himself back in the day.

Key Man: Donie Shine - The move back to 11 proved fruitful during the league and though John Evans is robbing Peter to pay Paul to an extent by taking somebody as clinical as Shine out of the full-forward line, the accuracy of his deliveries into Senan Kilbride and Cathal Cregg could be a big plus.

Young Player: Diarmuid Murtagh - Hugely impressive during the Rossies' under-21 campaign, he can be lethal if given the right supply and is reliable from placed balls if Donie Shine ever lets him take them.

World Cup Twin: Ecuador - Surrounded by teams with greater tradition, but they could surprise a few people. Also, their jerseys are quite similar.

Sky Sports Celebrity Pundit: Luke 'Ming' Flanagan. Plenty of experience in front of the cameras and never afraid to air controversial views, even if the audience become sick of hearing them before too long.

JOE's Prediction: Round Three of the qualifiers

Key Man: David Kelly - Now injury free, he is the only marquee forward in the Sligo panel and they need him to be firing on all cylinders to drag Sligo far this summer.

World Cup Twin: Ghana, purely because they are called the Black Stars, and that would be a way cooler nickname for Sligo than The Yeats County. Sorry WB.

Sky Sports Celebrity Pundit: Kian Egan. The Westlifer can bring his talents from The Voice of Ireland to the GAA. A spinning chair would be handy if he wanted to turn around and see the game anyway.

JOE's Prediction: With only Galway or London to beat, at home, to reach a Connacht final, a provincial decider is well within their grasp. Past that though, they will struggle as soon as they run into any type of quality.