Nile Ranger just got his own name tattooed on his face

If Nile Ranger is ever hit with a case of temporary amnesia and can’t remember his own name he needn’t worry; all he has to do is look in the mirror.

The former Newcastle striker, who is currently a free agent having been released by the Magpies in March, is known as something of troubled character having been in hot water for amongst other things, posing with a replica gun, causing criminal damage and for facing allegations of rape in the past.

While his latest actions didn’t harm anyone, we can’t help but feel that he might live to regret them a little later down the line.

The 22-year old, who already has a smiley-face tattoo on the inside of his lower lip (see above), posted a photo to his Instagram page yesterday of his latest offering, a  tattoo of his own surname on his right temple along with the message ‘My name rings bells’ and the hashtags #POWERFUL #RANGER #INKKING. 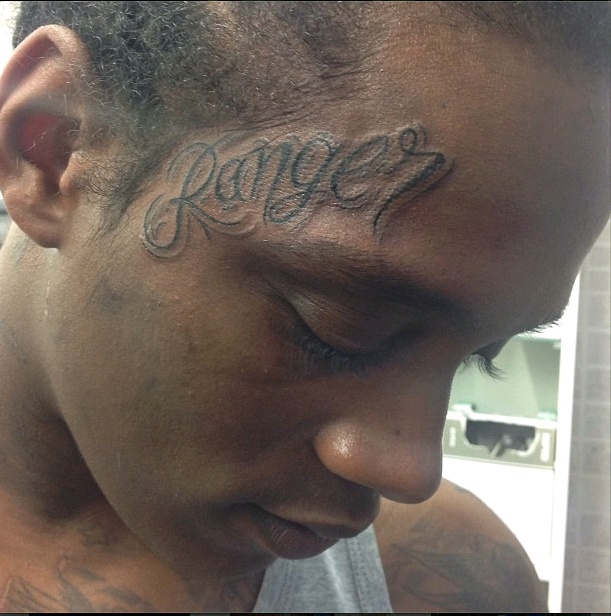 Ranger wouldn’t be the first footballer to permanently decorate himself with a dodgy tattoo, but this one surely takes the biscuit.

popular
The JOE Friday Pub Quiz: Week 300 - the Triple Century
Rain and thunderstorm warning extended to include 15 counties
One of the most underrated sequels of all time is among the movies on TV tonight
A classic Western is among the movies on TV tonight
Met Éireann gives update on weather warnings for this weekend
An underrated Jason Statham thriller is among the movies on TV tonight
New horror movie trailer has one of the best jump scares in years
You may also like
1 month ago
What is BeReal? The new social media platform taking Ireland by storm
2 months ago
Liam Payne finally explains weird accent during hilarious Oscars interview
2 months ago
People Before Prada - The Hadid / Boyd Barrett connection taking the internet by storm
3 months ago
Instagram launches new features for the feed
3 months ago
Kanye West has finally been suspended from Instagram
3 months ago
Tinder Swindler conned out of $7,000 after falling for online scam
Next Page