This week saw the sad passing of Ecuadorian striker Christian ‘Chucho’ Benitez at the age of 27, a player who became known to Premier League fans after a solitary season with Birmingham City.

Benitez had only played his first game for Qatari club El Jaish when he was admitted to hospital complaining of stomach pains and is reported to have suffered cardiorespiratory arrest, though the exact nature of his death has yet to be confirmed. The 58-times capped international leaves behind a wife and twins as the footballing world comes to terms with the tragic news.

A noted talent in his youth, Chucho made a name for himself at his first club, El Nacional. In his three seasons there, the frontman hit an impressive 29 goals in 89 league games, with rumours that a number of teams in Europe were taking a keen interest, most notably Villareal.

That reported interest never went any further and in 2007, Santos Laguna brought the striker to Mexico . That same year he was voted the best Ecuadorian player playing outside his homeland and continued where he left off in Ecuador, his 10 goals contributing to Santos winning the Clausura in 2008. He was also voted the club’s player of the year.

In 2009 Birmingham City announced the club transfer record breaking signing of Benitez and while they wouldn’t disclose the fee at the time, it was believed to be between £6 and £9 million depending on add-ons.  The move was subject to Chucho receiving a work permit and passing a medical and when the medical examination showed possible knee problems, he became a “protected” signing, with an initial down payment and subsequent payments depending on appearances. City later clarified that the deal was in fact a loan. 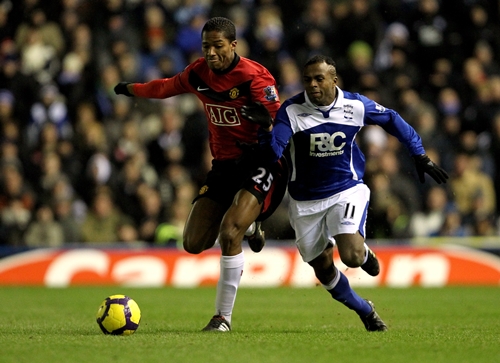 The striker made his debut against Man United at Old Trafford, making a grand total of 36 games in his first, and as it turned out, his only season in England. While he struggled for goals – he managed just three in the Premier League and a solitary strike in the FA Cup – so too did the team. Only three teams scored fewer than Brum’s 38 goals and two of those, Portsmouth and Hull, were relegated.

However Birmingham attempted to negotiate his transfer fee at the end of the season, but when the talks broke down, he was back on his way to Santos and was quickly back to his goal-scoring ways, finishing as leading scorer in his first campaign back.

Two years ago, fellow Mexican outfit América broke the Mexican transfer record to acquire his services, with a fee believed to be in the region of $10 million agreed between the two clubs. After a goal-scoring debut and early season hat-trick, he finished the Clausura season as joint top goalscorer, while last season the club became Clausura champions with a 4-2 win over Cruz Azul, Chucho scoring a penalty in the showpiece decider. 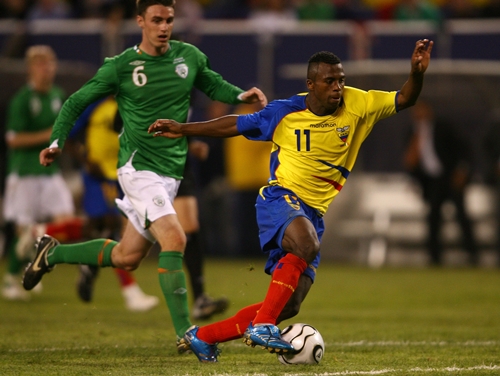 In action against Darren Potter and Ireland in 2007

At the start of July he signed for El Jaish after passing a medical, but tragically would play only one game for the Qatari club. With a record of 24 goals for the national team in 58 appearances, his international pedigree was evident and represented his country at the 2006 World Cup.

He will be sadly missed, in particular by the footballing journalists of Ecuador, many of whom broke down in tears when they heard the sad news. He was somewhat of a national hero on the football field, and this is a sad tale of a footballing life cut cruelly short.

popular
QUIZ: It's time for one of our trickiest General Knowledge Quizzes yet
The JOE Movie Quiz: Week 161
The 24 biggest movies still to come to cinemas in 2022
Landlords must give longer eviction notice periods under newly passed legislation
The JOE Friday Pub Quiz: Week 301
QUIZ: Can you get 100% in JOE's great big halfway through 2022 quiz?
Jordan Peterson suspended from Twitter over Elliot Page comment, says he won't apologise
You may also like
4 years ago
WikiLeaks founder Julian Assange has been given Ecuadorian citizenship
5 years ago
JOE Backpacking Diary #17 - Why Peru has absolutely blown me away in the last two weeks
5 years ago
JOE Backpacking Diary #16 - Extreme sports in Ecuador and extreme parties in Peru
5 years ago
JOE Backpacking Diary #15 - Finishing Colombia in style and my first few days in Ecuador
7 years ago
Vine: Neymar somehow managed to hit the crossbar from two yards out last night
8 years ago
World Cup Bet of the Day: France to beat Ecuador, but we do like the look of Enner Valencia
Next Page