Leigh Griffiths was left in no doubt as to how the Celtic fans felt about his alleged recent outburst of racist singing against Hearts.

Griffiths is a former Hibernian player (pic below) and a self-confessed fan who joined Celtic in January. However in recent weeks he has been caught up in controversy after allegedly been spotted singing derogatory songs about Hibs' bitter Edinburgh rivals, Hearts. The songs were aimed at a former Hearts player Rudi Skacel, implying he was a refugee. The matter is under investigation from the police, Celtic and the SFA. 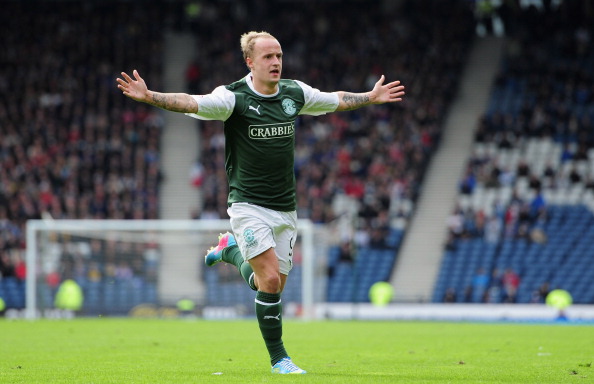 Celtic fans didn't take too kindly to the negative publicity and before the game against Inverness at the weekend, they unfurled banners (see below) with messages for Griffiths. One read: 'A man must be a Celt on and off the field otherwise he is of no value to this club'. Another banner read: 'refugees welcome, created by immigrants' which gives a nod to Celtic's formation in 1888.

banner from the Green Brigade today. a clear message to Leigh Griffiths. brilliant from the section. pic.twitter.com/XgggnORm8N

Griffiths went on to score in the 6-0 thrashing of Inverness making it seven goals in just eleven games for Celtic. He is clearly a player who could have a good career at Celtic, but will need to toe the line sooner rather than later to avoid annoying the passionate hordes at Celtic Park.

popular
The JOE Music Quiz: Week 117
QUIZ: You'll need to be razor-sharp to get 100% in this General Knowledge Quiz
The JOE Friday Pub Quiz: Week 307
An exciting Irish crime thriller is among the movies on TV tonight
A great underseen action thriller is among the movies on TV tonight
James May reportedly hospitalised after crashing into wall at 75mph filming new show
Record for hottest August day in Ireland ever has now been broken
You may also like
3 years ago
There was no immortality on offer for Brendan Rodgers at Celtic only a different kind of mediocrity
4 years ago
Ireland will play Celtic as part of captain Scott Brown's testimonial game
6 years ago
PIC: Celtic fans supposedly sent this official letter from the club about their personal hygiene
8 years ago
Seven things Celtic players can expect if Roy Keane takes over as manager
8 years ago
Video: Watch as Celtic takes on the Soccer AM Crossbar Challenge
8 years ago
French second tier football team appoint first female head coach
Next Page