Pic: Even the Daily Mail don’t seem to believe their Iniesta to Man United story in today’s paper

The international break is pretty exciting over here at the moment as we await the start of the MonKeano era against Latvia tomorrow night, but across the pond, a few sensationalist transfer stories have appeared in the papers in an attempt to fill the void until the return of the Premier League next weekend.

Possibly the most sensationalist of all appeared in today’s Daily Mail, where it is suggested that Manchester United manager David Moyes is preparing a move for Barcelona’s Andres Iniesta in light of supposed difficulties over the negotiation of a new contract for the impish Spanish genius.

Considering that Iniesta has been at Barcelona since he was 12 and doesn’t appear to have given any indication that he’s unhappy it is a move which appears unlikely to say the least and on the back page of their own paper today, it seems as if Wayne Rooney is responding to the ridiculousness of the rumour in a giant picture on the back page. 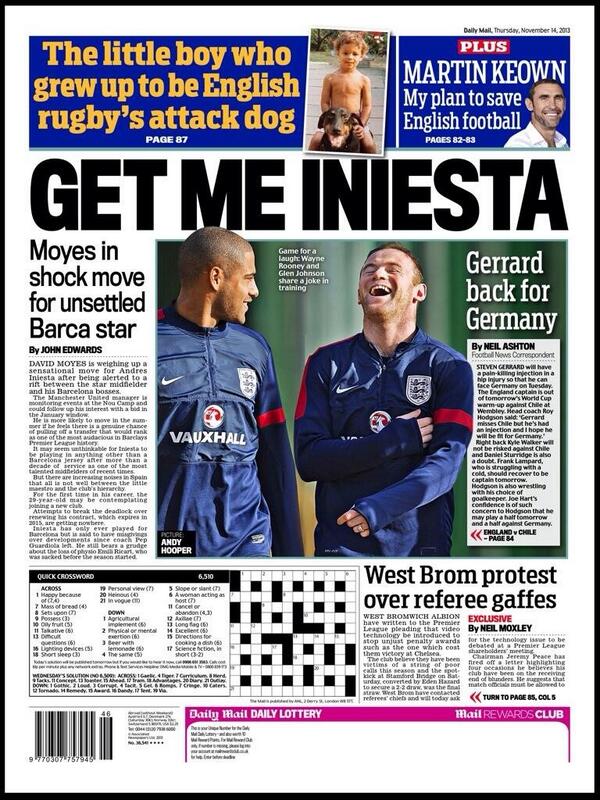 We’re sure the alignment of the picture and the headline was a complete accident and the layout editor wasn’t attempting to have a laugh at their own paper’s expense, but in any case, we’d be inclined to agree with Wayne on this one.

popular
Netflix has just added one of the funniest shows of the last 10 years
Netflix has just added 12 very big movies to their library
Spielberg's best movie is among the movies on TV tonight
The JOE Friday Pub Quiz: Week 332
Police believe they know what happened to Nicola Bulley
QUIZ: Can you get 15/15 in this Irish general knowledge quiz?
The 50 most iconic songs of all time* have been revealed
You may also like
8 months ago
BBC trainee accidentally posts message mocking Man United live on TV
1 year ago
COMPETITION: WIN a copy of Eric Cantona's new Manchester United documentary, The United Way, on DVD
1 year ago
Manchester United documentary written by Eric Cantona available to watch at home in Ireland this May
2 years ago
Marcus Rashford launches book club to help kids experience 'escapism' of reading
2 years ago
Paul Pogba releases powerful statement in response to 'fake news' from The Sun
2 years ago
The JOE Pub Quiz: Week 214
Next Page