Pic of the Day: Surely the most unusual passenger on Dublin Bus today

We imagine bus drivers see all types on their buses, but one Dublin Bus driver must have been taken aback by one commuter today.

Anyone who has the pleasure of taking public transport will testify, commuters can be a wide range of characters, but this must be something new.

The picture was taken by Paul Trainer and shows a man attempting to get a donkey on the 150 bus as if it were an everyday occurrence. The donkey doesn’t seem too flustered either and we don’t know what the reaction of the bus driver was to the unusual passenger. 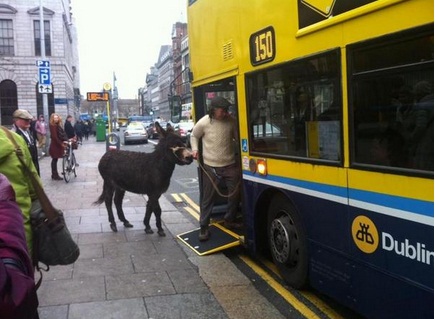 Bus drivers are used to having awkward customers from time to time, but this may well be the biggest ass this particular driver has ever encountered.

As Paul said himself, ‘Dublin is deliciously odd sometimes’. Touché.

The Big Reviewski || JOE · The Big Reviewski with Andy Serkis, Squid Game follow-ups & the return of Succession
popular
Largest aircraft in the world touches down at Shannon Airport
Facebook looks set to change its name as part of rebrand
How to lower your cholesterol - 5 really handy tips
Skeletal remains of six people found under Cork pub
An underrated Denzel Washington thriller is among the movies on TV tonight
The 100 greatest TV shows of the 21st century have been revealed
Claire Byrne was having absolutely none of Nigel Farage's claims on Monday night
You may also like
5 years ago
WATCH: This video showing 'hand-rolled ice cream' in Dublin is mesmerising
5 years ago
There's a new app that helps people find any food, drink or product they're looking for, locally
5 years ago
5 reasons why your business should 'pop-up' at one of Dublin's busiest stations
5 years ago
JOE BUSINESS: 3 great reasons you should pop-up in Dun Laoghaire this summer
5 years ago
This new app will help you keep track of the Luas strikes
5 years ago
TWEETS: Mixed reaction as Joan Burton steps down as leader of the Labour party
Next Page