One of the biggest names, and people, in the NFL is in Dublin tonight and he posed for a picture with some fans.

If you follow the NFL closely you will know that Pittsburgh Steelers QB Ben Roethlisberger was in England today to help promote the game between his team and the Minnesota Vikings later this year. You might have already seen him on Sky Sports News where he spoke about the upcoming season and assured fans that his knee, which he had an op on in June, was feeling ‘brand new’.

That will be good news not just to fans but to his boss, Steelers team owner Dan Rooney, the former US Ambassador to Ireland. Both Rooney, and Roethlisberger, are in Dublin to take part in the annual football game held every July 4 at the Irish Ambassador’s residence.

"I got to go to the Ambassador's residence last year and see what he does there, but it will be great to go back," Roethlisberger told the Steeler’s site. "Plus we get to see the game he puts on for July 4 and I will make sure I do a good job flipping the coin."

This picture confirms that Ben is indeed here in Dublin, and he was spotted in Shanahan’s restaurant in Dublin, where he happily posed with some fans for a quick picture. 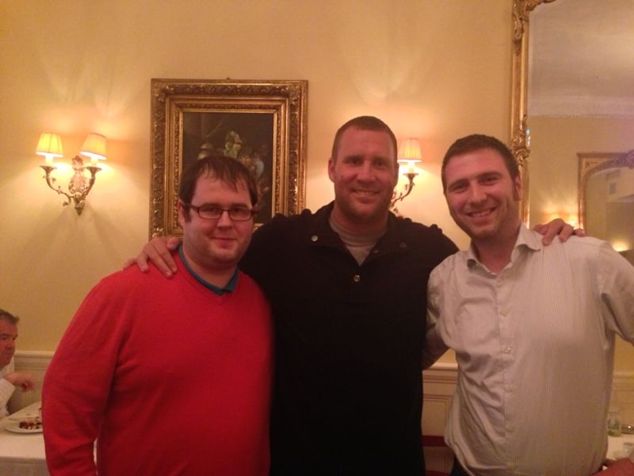 Delighted to have you Ben... and if you want to pop in to see us we'd be delighted...

popular
Gardaí warning people not to make unnecessary journeys in anticipation of Storm Barra
Carlow woman banned from keeping animals for life after starving dogs to death
"Danger to life" risk with Storm Barra "weather bomb", warns Met Éireann
Landscapers is the ultimate true-crime murder mystery show
The JOE Movie Quiz: Week 131
Man dies after being attacked by newly calved cow in Mayo
QUIZ: Name all the countries that contain 11 letters
You may also like
10 hours ago
Dublin white water rafting project finally shelved after years of public apathy
4 days ago
Gardaí seize 38 dogs and other exotic animals in Dublin
4 days ago
New airline to provide low-cost flights from Ireland to Iceland
5 days ago
Man arrested after shots fired at Garda patrol car
6 days ago
Gardaí stop and arrest man with weapons and balaclava in his car
6 days ago
Over €1.3 million of cannabis and cocaine seized in Dublin
Next Page