Pic: Sky had a very interesting description of the All-Ireland under-21 final on TG4 yesterday

Last week we heard hurling described as ‘a warlike ballgame played on foot with clubs’ but even that doesn’t come close to one description of the All-Ireland under-21 final yesterday.

If you were flicking the channels and wondering what live game TG4 were covering during GAA Beo yesterday afternoon, you would surely have raised an eyebrow of what Sky had to say about TG4’s coverage of the All-Ireland under-21 final and B final in Thurles. 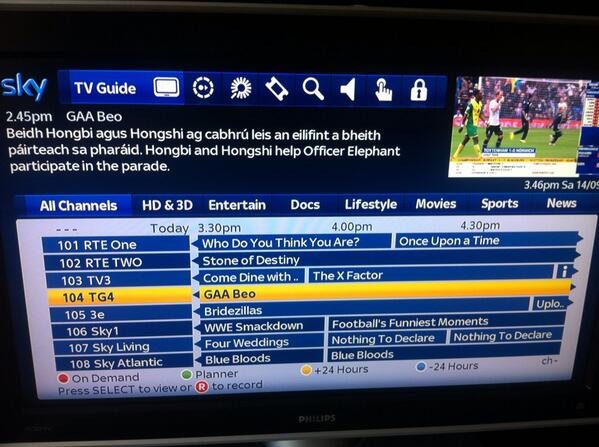 They might have got the parade part right but as far as we’re aware there were no Hongbis, Hongshis or Officer Elephants in Semple Stadium, even if it ended up being mere child’s play for the victorious Banner outfit, who prevailed by a scoreline of 2-28 – 0-12 over Antrim in the main event.

The Big Reviewski || JOE · The Big Reviewski with Y: The Last Man, that Malignant ending & a secret streaming service
popular
It looks like Garth Brooks will play FIVE nights in Ireland after all
One of the most-anticipated movies of the last few years is finally available to watch at home this week
Gardaí warn of scam involving "inappropriate or sexual images" after young boy blackmailed for money
The film that predicted the pandemic is among the movies on TV tonight
Mark Wahlberg and an intense battle are among the movies on TV tonight
Government announces special €1,860 payment for laid-off workers during pandemic
Woman dies after being struck by lorry in Kildare
You may also like
1 month ago
Hurling fans urged to limit social activity after All-Ireland final due to "high rate" of Covid
1 month ago
Major delays after bales of straw fall from lorry on M7
1 month ago
Irish Rail warns hurling fans travelling to Dublin for All-Ireland Semi-Finals that pre-booking is mandatory
2 years ago
Gardaí issue notice to anyone travelling to All-Ireland final on Sunday
2 years ago
WATCH: American comedian's reaction to hurling is one of the funniest things we've seen in ages
2 years ago
Teenager suffers heart attack after being hit by sliotar during match
Next Page