Tottenham Hotspur issued an apology to Liverpool claiming their Vine account had been "compromised" and that an investigation was being launched.

After the drama at Selhurst Park last night in which Liverpool blew a three goal lead to finish 3-3 with Crystal Palace, the official Spurs Twitter account tweeted a Vine entitled 'Brutal but very funny. The biggest capitulation since Newcastle in the '90s.'

The tweet was accompanied by a Vine video, which jumped  from Liverpool captain Steven Gerrard leading an inspirational team huddle after victory over City to his slip against Chelsea. The Vine then showed Gayle scoring the equaliser for Palace last night and then their manager Pulis laughing in an unrelated incident. 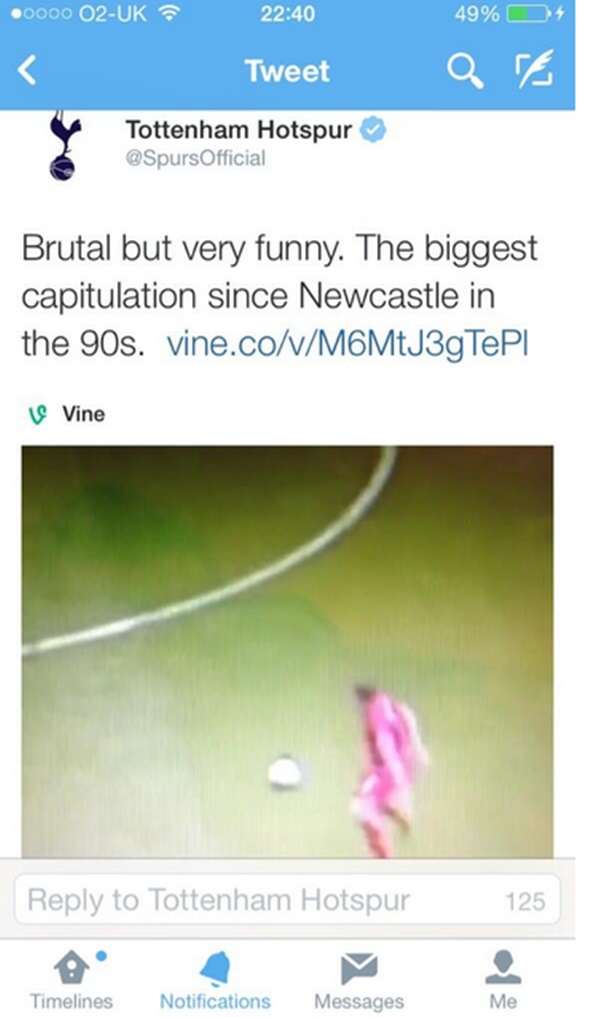 It was quickly removed by Spurs who claimed there was a breach of security and that their Vine account had been compromised. The club are now are insisting that the Vine was not created by any employee of Tottenham Hotspur.

We are currently looking into a security issue where our official Vine account has been compromised.

We apologise to anyone offended by a recent tweet, which was immediately deleted. This post was not tweeted by anyone affiliated to THFC.

Whether it was a mistake or not, the timing of it would have incensed Liverpool fans who are understandably feeling very sensitive right now. All eyes will be on Manchester tomorrow night as City look to hammer home the advantage with a home game against Aston Villa.

Win, lose or draw, all Vine accounts will be watched with military obsession.

Hat-tip to Colm Finn for sending this our way on Facebook.

popular
Bus Éireann’s service from Dublin to London will restart this week
Gardaí unveil new Armed Support Unit vehicles to replace older models
One in two young people likely to not own a home by the time they retire
Rockstar Games reportedly shelving remasters of two of the best games ever made
Conservative Party vice chairman resigns live on TV as Johnson administration thrown into turmoil
An action-packed thriller is among the movies on TV tonight
The full list of cancelled flights in and out of Dublin Airport on Monday (so far)
You may also like
1 month ago
Merseyside police defend ‘exemplary’ Liverpool fans tear gassed by French police
7 months ago
Police issue warning over CCTV footage of Liverpool bomb explosion
7 months ago
Liverpool bomb declared a terrorist attack as police confirm fourth arrest
7 months ago
Liverpool bomb: Taxi driver "locked bomber inside car" after spotting explosives (Report)
1 year ago
Gini Wijnaldum shares his favourite gym exercises for building abs of steel
1 year ago
Armed police close gym near Liverpool after owner refused to shut doors
Next Page