Pic: The Bloomberg News description of hurling is quite something

Fans of the small ball game don’t need to be asked twice to wax lyrical about the game and the descriptions of it this year have been even more eloquent and complimentary after one of the most open and exciting championships in years.

No matter how you’ve heard hurling described in the past, however, there’s a good chance you’ve never heard anything close to how it is explained in a Bloomberg News article (see below) about Minister for Finance Michael Noonan, of whom it is said that he was once competitive at the sport. 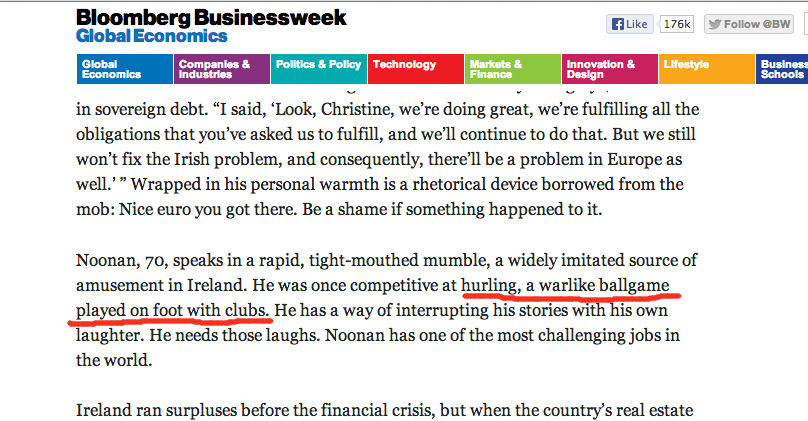 ‘A warlike ballgame played on foot with clubs.’ We’re not sure whether hurling folk should take that as a compliment or an insult even if the language used harks back to a time when Cu Chulainn himself first played the game years and years ago.

Get the folks at Bloomberg a couple of tickets to the All-Ireland Hurling Final replay and let’s see what they’ll come up with then.

Hat-tip to GAApics.com for giving us the heads up

The Big Reviewski || JOE · The Big Reviewski with Y: The Last Man, that Malignant ending & a secret streaming service
popular
The JOE Friday Pub Quiz: Week 261
One of the best war films ever made is among the movies on TV tonight
The five "best places to live" in Ireland have been revealed
One of the better Liam Neeson action romps is among the movies on TV tonight
QUIZ: Flex your brain definition with this general knowledge quiz
Daniel Craig says goodbye to James Bond in emotional farewell speech
The 50 most iconic songs of all time* have been revealed
You may also like
11 months ago
Post-match celebrations and a lack of social distancing at certain events put club game on hold
11 months ago
Cork GAA pleads with clubs and supporters “not to engage in celebrations that breach current guidelines”
1 year ago
What's the Bronco test and why it may come up in conversation this week
1 year ago
The Andy Moran GAA Isolation Workout
1 year ago
SuperValu, Centra and the GAA team up on initiative to support elderly people
1 year ago
Meath GAA club confirm adult player has tested positive for coronavirus
Next Page