Not too many fans were interested in Rory McIlroy at the World Golf Finals today and with the missus, Caroline Wozniacki, adopting such a suggestive pose on the sidelines, can you blame them?

McIlroy was taking part in the World Golf Finals in Turkey today, where he played a pretty crappy round and was soundly beaten by Matt Kuchar, the American gaining a measure of revenge for the Ryder Cup defeat the weekend before last.

One didn’t have far too look for excuses for McIlroy’s poor performance, however, as how was he expected to concentrate when his missus, Caroline Wozniacki, was parading around after him in a get-up that left quite a lot to the imagination. 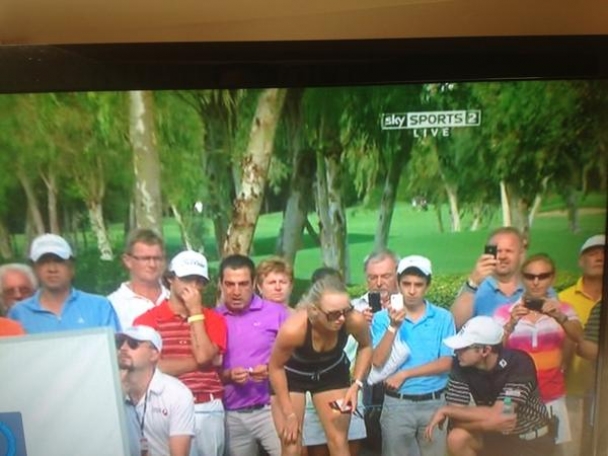 If the picture above is anything to go by, Rory wasn’t the only one distracted by the Danish tennis star. We can spot about 15 pairs of eyes and only a couple of them aren’t fixed firmly on Wozniacki, hell even Rory himself seems to be sneaking a quick peek.

Looks like Joe Hart wasn’t the only one caught rotten today after all.

Hat-tip to the eagle-eyed Sean Malee for sending this into us on Twitter.

popular
Eurovision producers reveal "irregular voting patterns" during Saturday night's final
One of Liam Neeson's best ever performances is among the movies on TV tonight
QUIZ: Try out one of our trickiest General Knowledge Quizzes yet
Where will 2023's Eurovision be held if Ukraine can't host?
QUIZ: Can you name the disaster movie from a single image from each disaster
The JOE Movie Quiz: Week 154
REVIEW: Van Gogh Dublin is a truly unique cultural experience
You may also like
5 years ago
WATCH: This video showing 'hand-rolled ice cream' in Dublin is mesmerising
5 years ago
There's a new app that helps people find any food, drink or product they're looking for, locally
5 years ago
5 reasons why your business should 'pop-up' at one of Dublin's busiest stations
5 years ago
JOE BUSINESS: 3 great reasons you should pop-up in Dun Laoghaire this summer
6 years ago
This new app will help you keep track of the Luas strikes
6 years ago
TWEETS: Mixed reaction as Joan Burton steps down as leader of the Labour party
Next Page