If you like good football and good television, then you’ll be a fan of the impressive Pep Guardiola front cover on the most recent version of German sports magazine 11Freunde.

Fans of both Breaking Bad and football will probably have a hard time deciding what they’re most looking forward to over the coming weeks; the start of the new season in all the major European leagues or the final season of Breaking Bad, arguably the most popular TV show of recent years.

One of the biggest storylines ahead of the new season is the task that awaits Pep Guardiola at the all conquering Bayern Munich, who only went and won the treble in Jupp Heynckes’ last year in charge. No pressure then Pep.

Combining the anticipation greeting Guardiola’s start to the season at Bayern and the return of Walter White, Jesse Pinkman and company for the final season of Breaking Bad, German sports magazine 11 Freunde came up with a quite brilliant magazine cover imagining Pep in the Heisenberg role, although we would worry for Guardiola himself and for Bayern if he becomes as power-mad as Mr.White’s alter-ego in the show. 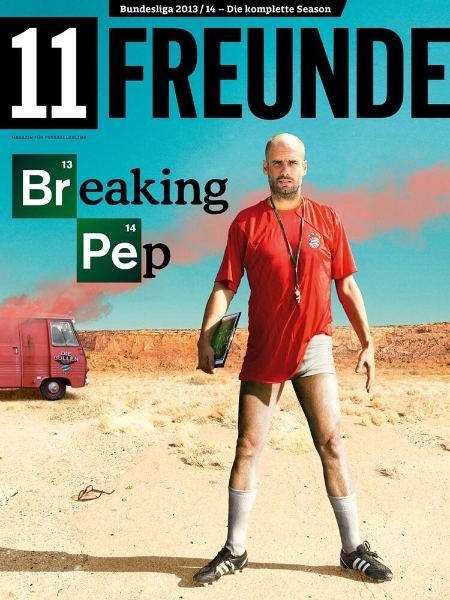 popular
One of the best movies of the decade has just been added to Netflix
Cristiano Ronaldo 'agrees £173m-a-year deal' with Saudi club
Country singer Jake Flint, 37, dies in his sleep just hours after his wedding
20 years ago, one of the best sci-fi movies of the 21st century was a box-office bomb
U2 drummer Larry Mullen Jr. says band may perform without him in 2023
Katherine Ryan says famous TV star is a ‘predator’ and everyone in industry knows
Surprise frontrunner emerges as potential next James Bond as producers 'love him'
You may also like
3 months ago
Breaking Bad and Better Call Saul creator reportedly has next new show lined up
1 year ago
EXCLUSIVE: Bob Odenkirk on the one dangerous stunt he DIDN'T do in new action movie Nobody
2 years ago
New Better Call Saul trailer shows the return of Breaking Bad's most beloved character
2 years ago
Season 5 of Better Call Saul will see the return of two beloved Breaking Bad characters
3 years ago
El Camino gives Breaking Bad fans closure, but it's a mostly pointless detour
3 years ago
Acclaimed actor Robert Forster has died, aged 78
Next Page