Pic: This is pride; Shane O’Donnell’s brother in tears as he watches the All Ireland in Israel

If you thought you enjoyed Shane O’Donnell’s work yesterday, wait until you see and hear how his brother Oisin felt about it.

The star of the day yesterday was obviously Shane O’Donnell. The Clare youngster scored 3-3 and he became an instant, and lifetime, legend in the Banner.

Clare people reveled in his performance all over the world but nobody enjoyed it more than his brother Oisin.

Oisin works for Shanahan Engineering and after a summer spent at home going to all the game, including the drawn final, the civil engineer was sent to Israel to work on a power plant over there last week, meaning he would miss the final.

But like Clare folk all over the world, Oisin found a bar and settled down to watch the match. Then he saw his brother do what his brother did and, well, he was overcome with emotion. 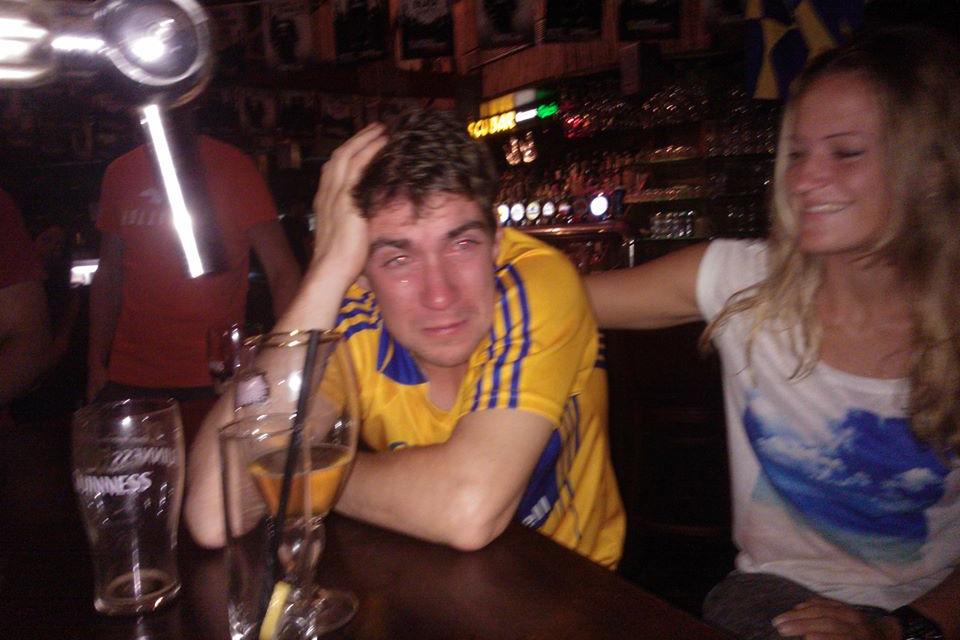 JOE spoke to Oisin today via mail and here’s how he described the day.

I'm not embarrassed showing emotion when it comes to yesterday's game and Shane's performance.

It was heart breaking to be coming over here and missing the replay but I enjoy my job and didn't want jeopardize it.

I was, just like the first final, on the edge of my seat for the whole game. Both games were roller-coaster like with all of the twists and turns. It was great to see Shane being a part of it all and how well he played was unbelievable. Pride would have been the overpowering emotion. I knew he was capable of that kind of a performance. I was joking with him before I left saying that he was going to be like Eamonn Taaffe in the '95 final. I am delighted to say that his contribution yesterday was greater than Taaffe's in '95. It's incredible stuff.

COME ON THE BANNER!

A proud Clare man and a proud brother.

Big thanks to Danny McMahon for putting us in touch with Oisin and an even bigger thanks to Oisin, for allowing us to use the pic and for speaking so proudly about his brother.

It's what the GAA is all about.

popular
Thunderstorm warning for Ireland escalated to Status Orange with hail and flooding forecasted
Gardaí urge public not to share "upsetting" pictures of fatal assault of Paul 'Babs' Connolly in Westmeath
Disney+ has just added 10 big movies to its library
The JOE Music Quiz: Week 117
An exciting Irish crime thriller is among the movies on TV tonight
QUIZ: You'll need to be razor-sharp to get 100% in this General Knowledge Quiz
The JOE Friday Pub Quiz: Week 307
You may also like
1 month ago
Looking for a hotel room for the All-Ireland Final weekends? It won't come cheap...
1 month ago
Taoiseach condemns "disturbing" fight at Galway v Armagh game
2 months ago
The 2 Johnnies share unbelievable catfish ordeal affecting over 40 people
3 months ago
Limerick hurler arrested following alleged altercation with Tipperary player in Limerick pub
3 months ago
Woman in her 20s dies after accident during Camogie match
10 months ago
Wicklow GAA to investigate fight after Under 15 match on Saturday
Next Page