Picture: They're even celebrating BOD's birthday on the London Underground

Brian O'Driscoll's birthday has been celebrated far and wide, even on the Tube

Miles Kington is originally attributed with the famous quote about wisdom, fruit salads and tomatoes, but we perhaps are more familiar with it when the legend that is Brian O'Driscoll said it in one of the best sporting press conference moments that we can remember.

There have been plenty of tributes paid to the man today, it being his birthday and all, not least our own, but this one from the London underground shows that pretty much everyone knows what a legend he is. 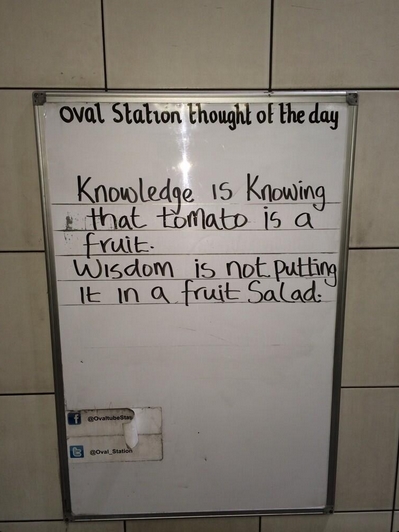 The message was posted on the wall of Oval Tube station in London, which has become something of a tradition to brighten up the morning commute for Londoners. These thoughts of the day started out as 'Thoughts Of Angel' at Angel Station and Oval Station’s 'Thought Of The Day', the latter being where this one was snapped by Niall Walsh, who shared the pic with us on Twitter.

popular
Patient arrested after switching off roommate's ventilator because it annoyed her
Peter Kay moved to tears on stage while opening his first stand-up tour in 12 years
Dancing with the Stars has added a very surprising contestant
Winter warning issued as "severe" week of cold weather in store for Ireland
'America's Unknown Child' identified solving mystery after 65 years
U2 drummer Larry Mullen Jr. says band may perform without him in 2023
Ireland sees '100% success rating' with four-day work week trial
You may also like
1 week ago
Ronan O'Gara confirms he is on three-man shortlist for England job
1 month ago
"It was honestly like wrestling a vending machine" - Greg O'Shea on his new fitness series
2 months ago
Iconic rugby commentator Eddie Butler dies aged 65
8 months ago
Scottish Parliament official dies during rugby game in Dublin
9 months ago
Every Guinness fan needs to try these brand new experimental beers
9 months ago
"Samaritans saved my life" - Brent Pope praised for honest interview on Tommy Tiernan Show
Next Page