Remember the lad who got the 'Moyes Out' tattoo? He's just updated it

You have to admire this sort of commitment to a cause.

While there were plenty of low points during David Moyes' short-lived spell in charge of Manchester United, the brutal 2-0 defeat away to Olympiacos in the Champions League stands out as one of the worst. Since his sacking this week, many have cited that February clash as the date the board decided that Moyes was not the long-term replacement for Alex Ferguson.

Anyway, in the wake of that game, one of the big stories was the tale of an unknown Manchester United fan who was so incensed by the club's poor form that he got 'Moyes Out' tattooed on his back.

Two months later, and with Moyes now issued with that P45, the unhappy fan has gotten his tattoo updated. 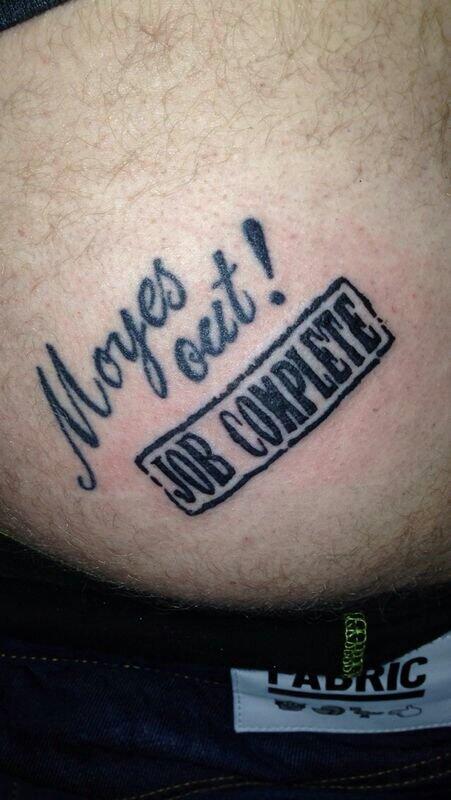 At the time we speculated that the tattoo was a bad idea because either Moyes would turn it around (we were wrong there) or it would look stupid when he was fired. Whatever you think of it, he's trying to make the best of it at least.

UPDATE: The man himself, Ash Evans, has been in touch to say he actually got the original tattoo after the shocking Capital One Cup loss to Sunderland in January. We asked had he any more tats planned but he hasn't at present. However, he will be in touch if he gets more.

Keep it with JOE for all your Van Gaal/Giggs/Simeone tattoo news next season.

popular
The JOE Friday Pub Quiz: Week 300 - the Triple Century
One of the most underrated sequels of all time is among the movies on TV tonight
A classic Western is among the movies on TV tonight
Met Éireann gives update on weather warnings for this weekend
Rain and thunderstorm warning extended to include 15 counties
An underrated Jason Statham thriller is among the movies on TV tonight
New horror movie trailer has one of the best jump scares in years
You may also like
1 month ago
BBC trainee accidentally posts message mocking Man United live on TV
1 year ago
COMPETITION: WIN a copy of Eric Cantona's new Manchester United documentary, The United Way, on DVD
1 year ago
Manchester United documentary written by Eric Cantona available to watch at home in Ireland this May
1 year ago
Marcus Rashford launches book club to help kids experience 'escapism' of reading
1 year ago
Paul Pogba releases powerful statement in response to 'fake news' from The Sun
1 year ago
The JOE Pub Quiz: Week 214
Next Page