Reports: Legendary striker Pippo Inzaghi is about to be named as the new AC Milan manager

The goal-machine is set to replace Clarence Seedorf at the San Siro...

Italian football is one of the toughest leagues to manage in, because the rate at which clubs go through managers is frightening. Now it's reportedly happening at the big clubs as Seedorf is about to find out.

The Dutchman has been in charge of AC Milan for just four months and, according to reports in Italy, the club feels that his 8th place finish in Serie A isn't good enough so he may have to go. It's pretty harsh to say the least considering that he only took over in January.

The man who's in line to replace him is none other than the master of diving, being offside and most importantly goal-scoring; Filippo Inzaghi.

Inzaghi has no experience of coaching a senior side but he's been in charge of Milan's Under-19 side for the past two seasons.

It's strange to see a club as big as AC Milan in such a mess but hopefully "Super Pippo" can bring back the glory days. 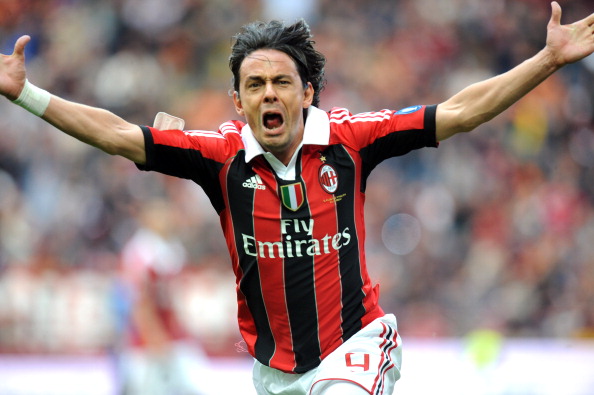 popular
One of the best movies of the decade has just been added to Netflix
20 years ago, one of the best sci-fi movies of the 21st century was a box-office bomb
Katherine Ryan says famous TV star is a ‘predator’ and everyone in industry knows
Surprise frontrunner emerges as potential next James Bond as producers 'love him'
U2 drummer Larry Mullen Jr. says band may perform without him in 2023
One of the scariest films of all time is among the movies on TV tonight
Prime Video has just added 26 very big movies to its library
You may also like
4 years ago
QUIZ: How well do you know Liverpool's 2005 Champions League final in Istanbul?
7 years ago
Vine: WTF!? Xabi Alonso's head disappears in this very strange real-life FIFA glitch
7 years ago
Does anyone know where former Ireland and Liverpool defender Steve Finnan is?
7 years ago
Video: The famous '05 Liverpool v AC Milan Champions League final has been recreated in Lego
7 years ago
Watch Leonardo Bonucci fall arse-over-face while celebrating a goal for Juventus
7 years ago
Fernando Torres has revealed exactly why he's returning to Atletico Madrid
Next Page