A brief Sunday game appearance makes a star of Katrina Parrock and the Sunday Game pundit gives a Waterford legend a low blow.

Last night’s Sunday Game had a lot for us to take in. Brawls, bucket loads of extra time  and jubilant scenes from the Limerick dressing room.

But a very brief appearance by a water carrier during the short highlights shown of Wexford’s defeat to Kilkenny in the camogie championship caused the biggest stir on Twitter. A very attractive Wexford water carrier appeared on screen causing the men of Ireland to wonder who she was, resulting in a lot of tweets in the process.

Wexford GAA were quick to point out that the mystery lady was All-Star forward Katrina Parrock, who is on water duty for her team-mates as she recovers from a broken arm. 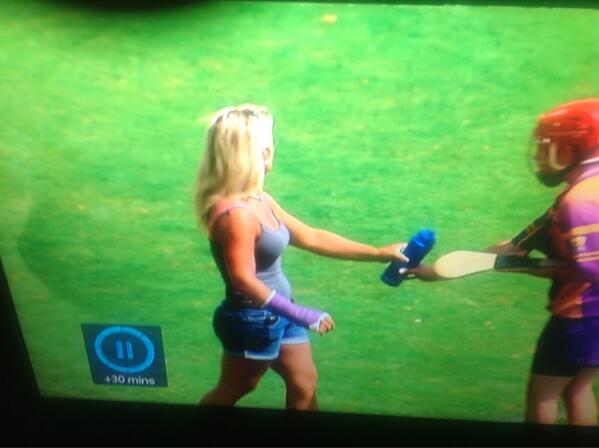 Wexford are struggling to retain their title and could do with Parrock back in the purple and gold rather than pacing the sidelines so for Wexford's sake, get well soon Katrina.

One of the many pleasing aspects to the Waterford v Kilkenny game on Saturday night was the frequent shots of the now retired Deise great John Mullane in the crowd, getting into the action and cheering just as much as any fan. It was clear he still cares deeply for his team.

But the sight of Mullane in the stand angered Ger Loughnane, as he outlines in his Daily Star column today. In a fairly extraordinary interpretation of what we saw on Saturday night in Thurles, Loughnane says: “If John Mullane was still playing, then Kilkenny’s long reign would have been ended on Saturday and he’d always be remembered. Instead, he took the easy way out.

“Waterford were undone by the shortcomings of their forwards. And the main problem with their attack was that they were without John Mullane.

“He should have given another year to the county. He let Waterford down at the very end. If Waterford had Mullane on Saturday, then I’m certain Kilkenny would have been beaten.

“No player in a Waterford jersey let the county down on Saturday evening. Rather it was an ex-player who left too soon who was found wanting.”

He may be right that Mullane could have won the game for Waterford, but to say the De La Salle man let his county down is just way too harsh.

popular
The Last Of Us Episode Five will premiere days earlier in Ireland and UK
Amazon Prime Video has just added 21 big movies to its library
Shock as blues singer beats Adele, Beyonce and Taylor Swift to win Song of the Year Grammy
One of the best crime thrillers ever is among the movies on TV tonight
5 years ago, Hollywood took a massive gamble on a huge sequel... and lost big time
Ben Affleck's bored expression at the Grammys becomes a meme
QUIZ: JOE's Big News Of The Day Quiz #41
You may also like
3 months ago
Brendan Óg Duffy's father speaks powerfully about his son's death
3 months ago
Gardaí investigating alleged assault on under-9 GAA player at children's sports event
5 months ago
Roscommon GAA confirms investigation into alleged assault on referee during juvenile game
6 months ago
Looking for a hotel room for the All-Ireland Final weekends? It won't come cheap...
7 months ago
Taoiseach condemns "disturbing" fight at Galway v Armagh game
8 months ago
The 2 Johnnies share unbelievable catfish ordeal affecting over 40 people
Next Page