This may be helpful for frustrated commuters.

As the controversial Luas strikes continue, it can be pretty hard to keep up with the latest in what's happening.

That’s why Jamie Farrelly decided to make an app, conveniently called Luas Strike Information, which tells you whether or not there will be strikes on any given day.

Or, as James writes in the app itself, when "the feckers are on strike." 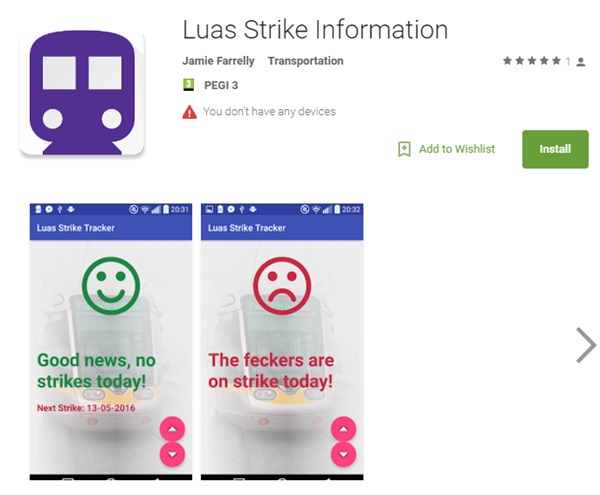 Speaking to JOE, James explained he created the App following his own frustration with the strikes.

"The Luas strike has been wrecking my head lately which is the same as a lot of people around Dublin.

So I made an app to actually let people know whether they are on strike and when the next strike is planned, if there is one - which is more often than not at this stage."

James explained that dates may be incorrect for short periods of time as it isn't an official Luas app, and he also added that he had jokingly included a 'Learn how to operate a Luas within the app' bonus feature.

You can download the App for android by clicking here, but there's no sign of an iOS version just yet.

popular
5 years ago, Hollywood took a massive gamble on a huge sequel... and lost big time
Netflix has just added 12 very big movies to their library
One of the most underrated crime thrillers of recent years is among the movies on TV tonight
Mystery over 'dead husband' spotted in Indian restaurant has been solved
Netflix backtracks on anti-password sharing measures following user outcry
The JOE Friday Pub Quiz: Week 332
QUIZ: JOE's Big News Of The Day Quiz #40
You may also like
6 days ago
Leo Varadkar says alleged assault on migrant camp in Dublin has the 'look of' a racist attack
1 week ago
This is what the cheapest house for sale in Dublin looks like
1 week ago
NTA publish €25bn plan for new Luas lines and Metrolink in Dublin
1 week ago
Three injured after fight breaks out at refugee centre in Dublin
2 weeks ago
Investigation launched after burglary at Hugo Boss store on Grafton Street
3 weeks ago
'Life changing' €1 millon lotto ticket sold in Dublin
Next Page