Two Irish fans have made a brilliant Father Ted inspired banner for the Ireland vs. Austria match

Signor Trap may have just named his side for tomorrow evening’s game but, following the home defeat to Sweden on Friday,  it’s hard to get ourselves overly excited about the must-win-but-it-really-doesn’t-matter match against the Austrians in Vienna.

Some Irish fans who have made the journey to the Austrian capital though have turned to a certain bastion of Irish wisdom in the desperate search for last-minute hope and inspiration – that’s right, they watched Father Ted.

Check out the brilliant banner below which Thomas and John James Kelly have designed for the game – "Is there anything to be said for saying another Mass?"

It’s a novel approach alright and we reckon Trap and the Boys in Green will take any help that’s going at this stage. 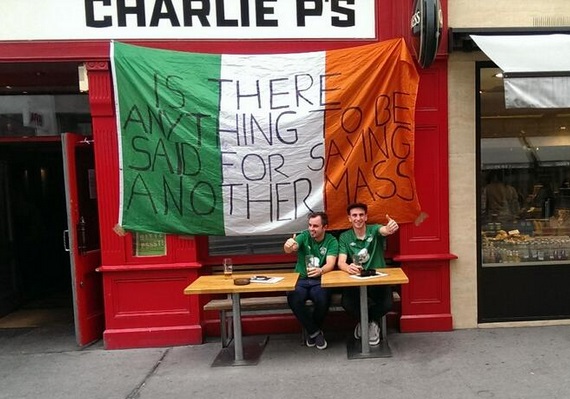 We’re not sure which drinks they actually ordered at the bar but let’s hope they haven’t been stealing Father Ted’s Communion wine. Although if they really think we’re going to qualify for the World Cup though then it’s probably two pints of crazy juice.

Enjoy the game lads, we’ll be keeping an eye out for you in the crowd. Thanks to Thomas and JJ Kelly for the picture via Twitter.

To find out Who You Are When You’re Hungry, head to http://www.snickers-generator.com.

popular
Simon Cowell concerns fans with appearance as they 'don't recognise him'
Parents told to stop buying selection boxes for kids- here's why
The JOE Friday Pub Quiz: Week 323
Netflix has just added 30 big movies to its library
Miss Croatia wears revealing outfit at World Cup game despite Qatar's dress code
20 years ago, one of the best sci-fi movies of the 21st century was a box-office bomb
Junior doctor 'fell asleep' at the wheel after 12-hour shift then mowed down two women and two kids
You may also like
1 day ago
The ultimate Guinness-themed football event takes place in Dublin this weekend
1 day ago
Everything you need to know about Lionel Messi and his last ever World Cup
3 days ago
World Cup 2022 Day 10: All the major action and talking points
5 days ago
World Cup 2022 Day Eight: All the major action and talking points
1 week ago
Miss Croatia slammed for raunchy World Cup videos that ‘disrespect Qatar’
1 week ago
World Cup 2022 Day Six: All the major action and talking points
Next Page