Sure it's a lovely little country if you could only put a roof on it.

The famous Christy Moore once said in his classic song Lisdoonvarna, "summer comes around each year, we go there and they come here."

However, May seems like a long time ago now and you really know you're heading into autumn when you can hear Premier League adverts coming through your television screen and there is talks about All-Ireland Semi-Finals doing the rounds.

How the Coronavirus spreads, what we know and threat to Ireland

END_OF_DOCUMENT_TOKEN_TO_BE_REPLACED

Culture-filled festivals, castles that display our amazing heritage and cities waiting to be explored in the crisp evening air. These are just a few reasons why autumn is special here in Ireland.

Tourism Ireland has created a new online film to remind travellers around the world who’re now planning their last minute short break or holiday that autumn in Ireland is simply unmissable.

The video takes a trip throughout the country from the capital of Ireland to the home of the cats in Kilkenny to the People's Republic of Cork before heading north towards Belfast. 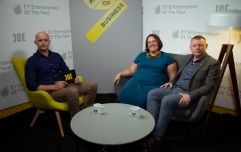 END_OF_DOCUMENT_TOKEN_TO_BE_REPLACED

The September to December period usually yields as much as 30% of Ireland’s annual overseas tourism business.

The leaves may be changing but one thing that will remain the same in this country is its picturesque scenery and here is the video to prove it.

popular
Simon Cowell concerns fans with appearance as they 'don't recognise him'
Parents told to stop buying selection boxes for kids- here's why
The JOE Friday Pub Quiz: Week 323
Netflix has just added 30 big movies to its library
20 years ago, one of the best sci-fi movies of the 21st century was a box-office bomb
Miss Croatia wears revealing outfit at World Cup game despite Qatar's dress code
Katherine Ryan says famous TV star is a ‘predator’ and everyone in industry knows
You may also like
4 weeks ago
6 deadly whiskey distilleries and experiences to try out in Dublin
3 months ago
Kickstart the ultimate Irish adventure with these 90 unmissable attractions and activities
3 months ago
Planning your next adventure? Here are 7 Irish attractions you need to visit this summer
4 months ago
Making summer plans? These any-weather trips and activities are perfect for your next day out
5 months ago
7 new and exciting Dublin attractions you need to try this summer
11 months ago
7 relaxing wellness experiences that are perfect for your next weekend away
Next Page