A minimum price for alcohol could be introduced in Ireland

It's a step closer.

Ireland could be about to introduce a minimum price on alcohol after a decision by a Scottish court has ruled that establishing a lowest price for drink is not in breach of EU law.

The appeal by the Scotch Whisky Association (SWA), was dismissed at the Court of Session in Edinburgh, with judges saying the grounds submitted "were not well founded' and that a minimum price is not in breach of European law. 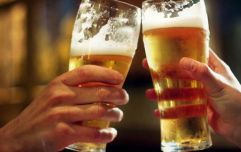 21% of Irish adults classified as hazardous drinkers in new study

END_OF_DOCUMENT_TOKEN_TO_BE_REPLACED

The decision could be challenged in the UK’s Supreme Court, but as things currently stand, the Scottish parliament looks very likely to implement this ruling.

This clearly has implications for Ireland because any potential legal threat that a minimum price might have on similar Irish legislation has now been diminished - in fact, the topic is set to be discussed next week in the Seanad.

Alcohol Action Ireland have welcomed the ruling, describing it as “a positive ruling for public health in Ireland”. They also stated that "the widespread availability of discounted alcohol in supermarkets is one of the key issues driving the misuse of alcohol, which is responsible for three deaths every day in Ireland, as well as a wide range of other harms".

popular
The JOE Friday Pub Quiz: Week 308
Pilots fly over destination airport at 37,000 feet because they were both sleeping
Passenger plane dropped 1,200 feet in a minute without pilots noticing
Netflix has just added 23 very big movies to its library
Two Irish people arrested in "smuggling event" near Miami
Multiple fatalities after planes collide mid-air over California airport
Here's how to make €9-11 on Revolut in just a few minutes
You may also like
4 months ago
A night out like no other... There's a spectacular new sensory dinner experience coming to Dublin
1 year ago
QUIZ: Can you guess the drink from its can?
2 years ago
Irish people have spent a lot of money on food and drink over the festive season
2 years ago
Lidl selling non-alcoholic wine for €3 per bottle this Christmas
2 years ago
Here are the best pubs and bars in Ireland, as voted at the Bar of the Year Awards
3 years ago
Ireland's first alcohol-free bar is opening up in Dublin this weekend
Next Page