40 years after retiring from bodybuilding, the Austrian Oak is still killing it in the gym.

Arnold Schwarzenegger may have recently turned 73 years old, but he's showing no signs of slowing down when it comes to pumping iron. 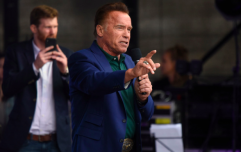 END_OF_DOCUMENT_TOKEN_TO_BE_REPLACED

The clip was posted to Instagram by his friend, German bodybuilder-turned-actor Ralf Moeller.

If having a military truck in his back garden wasn't enough of a statement, Schwarzenegger then took a loaded EZ Curl Bar off the back and set about performing some Bent-Over Rows. 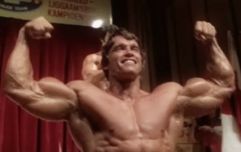 END_OF_DOCUMENT_TOKEN_TO_BE_REPLACED

There was no time for rest between sets though.

It was then straight into bicep curls, a much harder movement to master when you've got 52.5 kilograms of iron in front of you.

Arnold made it look easy. You might think "He's a former bodybuilder, he should be able to do it", until you realise he's 73 years old.

Most gym goers half his age would not be able to perform a bicep curl of that weight without using some form of momentum or swinging for leverage.

Schwarzenegger talks to fellow bodybuilder Serge Nubret, whom he competed against in the 1975 Mr. Olympia contest. (Photo: Getty)
Advertisement

When you go super heavy in the gym, you'll inevitably use some momentum. But if you're not aiming for a new PB and are just trying to build some new muscle, follow Schwarzenegger's lead and focus on form.

He was a very early proponent of the 'mind-muscle connection'. In other words, focusing on the muscle and feeling it contract as you move it against resistance.

A lot of people give bodybuilders stick for posing and flexing in the mirror, but during a training session, this will help you recruit the maximum amount of muscle fibres.

Science has proven this method to be effective, too.

One particular study found that applying a mind-muscle connection while training resulted in 12.4% greater bicep growth.

Who is going to argue with Arnold?