The Coronavirus has officially been declared a global emergency by the World Health Organisation, as the outbreak continues to spread outside of China.

The Coronavirus has been declared a global health emergency by the World Health Organisation (WHO).

The fears from WHO is that the virus could potentially spread to countries with weaker health systems.

The death toll now stands at 170 people in China, according to the BBC.

It is believed that there have been 18 instances countries outside of China, but no deaths. 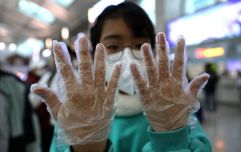 END_OF_DOCUMENT_TOKEN_TO_BE_REPLACED

Meanwhile, the HSE has said that the risk of the virus spreading to the public in Ireland remains low.

In a statement issued to JOE on Thursday, the HSE said: "The criteria (as defined by the WHO) which are used to decide whether a person has contracted coronavirus, combined with increased surveillance, will lead to some individuals being triaged and/or tested as necessary from time to time."


popular
Motorist in Kildare caught driving with tax 13 years out of date
Man (40s) killed after walking in front of oncoming truck after driving into a ditch
QUIZ: How many of these Line of Duty characters can you name?
QUIZ: How well do you know Will Smith's movie career?
BBC will show an 'immensely powerful' documentary about The Troubles tonight
Over 200,000 people have signed petition demanding change in how media treats those in the public eye
Social media is too far gone for kindness to win
You may also like
2 days ago
R. Kelly faces new charges alleging sexual abuse against a minor
4 days ago
242 new deaths recorded on deadliest day of coronavirus outbreak
5 days ago
113 animal species require "urgent help" following Australian fires
6 days ago
Death toll for coronavirus exceeds 1,000 people as China removes officials
1 week ago
Playstation 5 and Xbox Series X could be delayed due to Coronavirus
1 week ago
Trump acquitted of both charges by Senate in impeachment trial
Next Page