Gallery: The Rock's best workout pics, with a few ideas for your next gym session

We use The Rock as one of our main fitness inspirations, so we put together a few exercises that the big man himself might use that you can add to your routine

The Rock is a pretty big guy, so when he goes to the gym, he goes full out and doesn't do things by half.

We know this because he often tweets some pictures of himself absolutely maxing out from time to time, and they can serve as a pretty good fitness inspiration if you were thinking of skipping that trip to the gym today.

Check out a few of his workout pictures above (or click on the pictures below to open the gallery) and scroll down for a quick idea for an exercise routine alongside it that should have you feeling the burn. END_OF_DOCUMENT_TOKEN_TO_BE_REPLACED

The leg press means only one thing: it's leg day and you're going to be walking funny for the next few days. So here's a routine based on hypertrophy training, because friends don't let friends skip leg day, and we're friends, right?

Load up the press with a weight that you can do six reps of. Place your feet near the top of the platform, with the balls of your toes at the top and your toes just poking over the platform. Do six sets of six at this weight with a one minute break in between sets. The timing is important here, so resist the temptation to take a longer break.

Then, take about a quarter of the weight off and this time, place your feet at the bottom of the platform. From there, you want to lower your legs to get them as close to your chest as possible (until it feels like your heel might come off the platform), and then push them back up. Try and keep a regular, quick rhythm to this movement, and do six sets of 12 reps each, with only 40 seconds break in between each set. On the last set, go for broke and see how many you can get to really push your limits. We will forewarn you though, you're going to be extremely sweaty after this.

There's not a whole lot that you can do on the cable row that can be vastly different, but one thing you might try is doing a single arm seated row, and you'll notice the difference thanks to how much further back you can bring the weight. 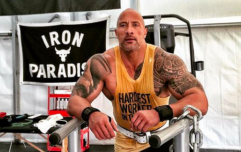 The Rock's portable gym looks like the ultimate place to train

END_OF_DOCUMENT_TOKEN_TO_BE_REPLACED

For this one, set the weight on the machine at a weight that you're comfortable in controlling with one hand and sit down with your feet on platform, maintaining a slight bend in your knees so that they don't lock. Keep the natural position of your back as you lean forward (from your hips, not bending over) to grab the handle, and return to a position where your torso is 90 degrees from your legs.

With your palm facing down, grip the handle and pull it back towards your torso. As you do so, rotate your hand so that your palm faces your ribs when you reach the final position, as pictured here. 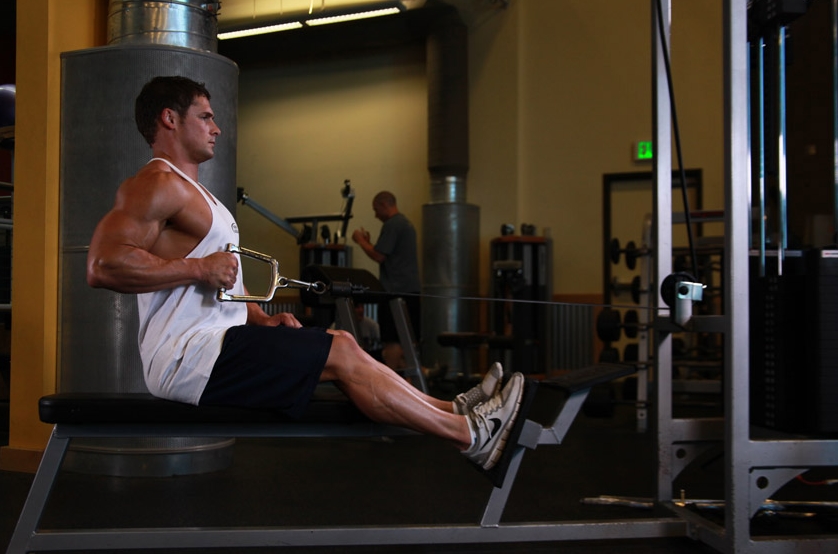 To finish, return the weight to the starting position, rotating your hand until your palm faces downwards again. Do three sets of ten on each side, swapping left to right or vice versa instead of focusing all on one side in order to give yourself time to recover. 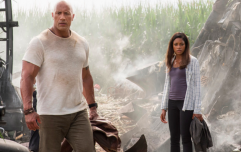 The Rock's stuntman shares his training and motivation tips

END_OF_DOCUMENT_TOKEN_TO_BE_REPLACED

We've covered a good few exercises to do in our chest workout video, but one exercise that's often ignored is the upward cable fly, which will hit a different part of your chest.

For this one, set the pulleys at the bottom of the cable machine and grip them, maintaining a slight bend in your elbow. Step forward with one leg in front of the other, keeping a bend in your knee on the front and go up on your toes on the leg behind, and maintain a neutral spine.

Bring your hands around to the front as if you were trying to grip a large ball, and make sure you bring the handles up to the top of the movement near the top of your chest, close to your chin. Breathe out as you pull the weight forward, breathing in on the way back, which should also be a slow, controlled motion. Don't choose a weight that's too heavy so that you end up letting it drag you backwards when you release it. Go for three sets of ten reps on this.

The biceps are a glamour muscle that everyone likes to work, but don't forget about hitting those triceps too. We have a few more ideas on how to do that over in our exclusive arm routine video, but for now, we'll pick one exercise that will be of benefit.

Grab a flat bar (not the easy curl) and get a wide grip on it, making sure that your shoulders are back and you're not hunching them in towards your chest.

From there, perform a regular curl, but keep a specific eye on your timing. If you're looking to gain muscle, bring the weight up for two seconds, hold it at the top of the contraction for two seconds, and bring it down for four seconds, maintaining that negative movement for a long period.

If you are instead aiming for explosive muscle strength, bring it up for one second, hold it for one second at the top, and then lower it for three seconds, once again maintaining the negative movement. It might sound easy, but between the wide grip and the timing, this is extremely difficult.

Form here, as always, is key, so don't sacrifice that for bigger numbers. Drop the weight from what you would normally do, and take the time to build back up. You'll notice the benefits straight away.

The shoulders are a group of muscles that are often ignored, and it's important to remember that there are three parts to the deltoid muscle which all need to be worked, the front, lateral, and rear. Many people focus solely on the lateral, but it's important to hit the front and rear as well. To do this, grab some light weights (these muscles are pretty small after all in the grand scheme of things) and do seated lateral raises in three different ways that will hit each part of your muscle.

Firstly, set up a bench so that you're sitting down with back support, and grab your weights so that your hands sit down by your sides. With your palms facing inwards, lift the weight on both sides laterally so that your palms face the floor on the way up, and as you reach the top, rotate them as if you were emptying a can of liquid on to the floor before bringing them back down slowly.

Next, face your palms forwards so that they point straight ahead of you, and lift the weights, maintaining the same position from start to finish. Again, concentrate on controlling the downwards movement.

Finally, lean slightly forward, keeping a neutral spine position, ensuring that you don't bend your back over or hunch your shoulders. The starting position of the weight is between your knees with your palms facing backwards. From here, raise the weight up, once again keeping the palms in the same position the whole time, making sure the downwards movement is controlled.

Go for three sets of ten on each version of the lateral raise, but make sure to keep the weight low, as these are all pretty difficult even with just a few kilos. If you want to up the intensity, perform the three exercises back to back as a circuit before taking a break.

There's not a whole lot that makes you feel more like a man than flipping a giant tyre around the place. Now, obviously not every gym has one of these, but you might be able to source an old one from a garage or farm, or check out gyms in your area that might have one. The lads at Raw Condition Gym in Dublin do, and you can follow them on Twitter here.

Here, the form is key, making sure that you don't bend your back over, but rather that you widen your stance quite a bit (just look at how The Rock is set up in the picture to get an idea), get underneath the tyre to bring it up, getting the power from your core and your legs.

Once you have it up to around chest height, change your grip around to be able to push the tyre forward, and then drive through it, almost as if you were starting to sprint, and push it to the ground again. For added benefit, you can jump either into the middle of the tyre and back out the other side, or on to one side of the tyre, down into the middle, and back up on to the other side to make it back over and flip it again. Aim for ten, but don't hold out hope that you'll hit that number, this isn't for the faint of heart.

As with all exercises, if you're not confident that you can control the form correctly from what we've told you here, don't hesitate to ask a trainer at your gym for help, that's what they're there for! And remember, get the form right first, the big numbers will come later.

House of Rugby Ireland · Quinn Roux on finding a home in Ireland and Mike McCarthy brings the absolute HEAT!
Open gallery
popular
Man arrested and charged for breaching Covid regulations in Kildare
The 50 most iconic songs of all time* have been revealed
QUIZ: Name all the countries of the EU that contain 2 vowels or less
This hidden Back to the Future 'mistake' has a subtly brilliant explanation
Joe Biden inauguration rehearsal paused as Capitol building goes into lockdown
QUIZ: Can you name the Marvel Cinematic Universe film from just a single screen shot?
QUIZ: Can you name all the teams in the NBA from their locations?
You may also like
1 week ago
The JOE Movie Quiz: Week 84
1 week ago
Dwayne 'The Rock' Johnson responds to being named Most Likeable Person in the World
3 months ago
The Rock has endorsed Joe Biden for US election
4 months ago
Dwayne 'The Rock' Johnson has tested positive for Covid-19
11 months ago
A necessary tribute to the joyful mayhem of the Fast and Furious saga
1 year ago
New comedy TV series based on The Rock's early days is in development
Next Page
Fitness &amp; Health | 7 years ago
6
shares

Gallery: The Rock's best workout pics, with a few ideas for your next gym session