Here are the European cities where people take the most cocaine

The Europe-wide study included over 60 cities.

A new study by the EU’s European Monitoring Centre for Drugs and Drug Addiction (EMCDDA) has revealed that Antwerp is the European city that consumes the most cocaine.

The residents of the Belgian city use more cocaine than any other Europeans – using, on average, 914.8mg per 1,000 people per day. London was second at 894.9mg.

The Europe-wide study included over 60 cities and here are the locations that consume the highest amounts of cocaine. 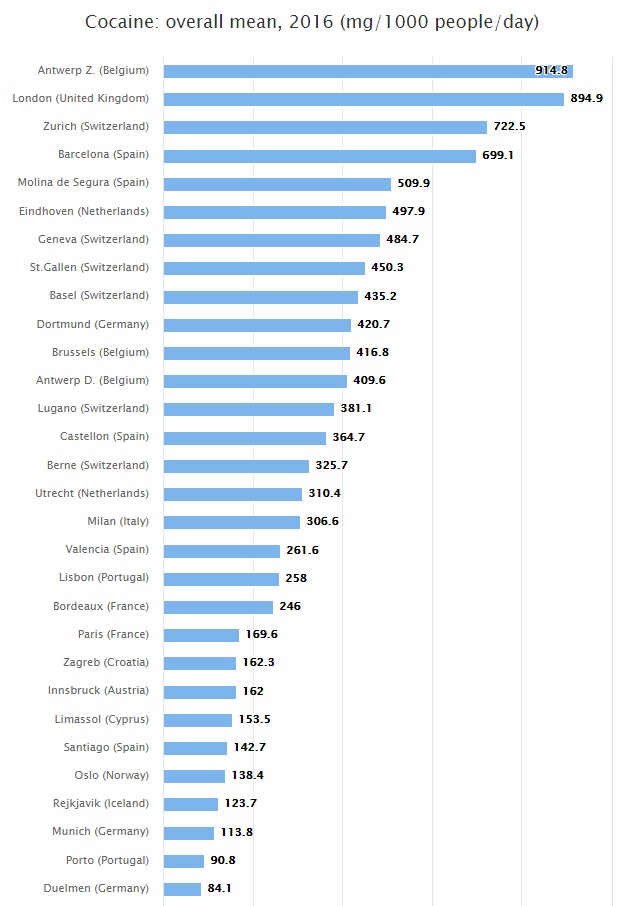 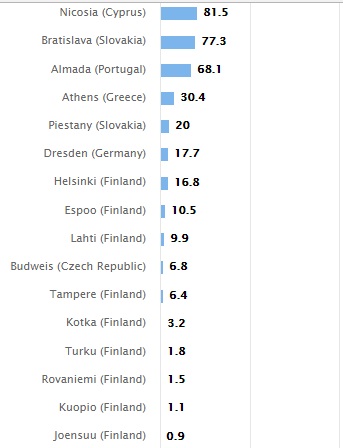 The findings of the largest European project to date in the emerging science of wastewater analysis has studied the wastewater in over 60 European cities and towns to explore the drug-taking habits of those who live in them.

The methodology involves sampling a source of wastewater, such as a sewage influent to a wastewater treatment plant. This allows scientists to estimate the quantity of drugs consumed by a community by measuring the levels of illicit drugs and their metabolites excreted in urine.

The Big Reviewski || JOE · The Big Reviewski with Andy Serkis, Squid Game follow-ups & the return of Succession
popular
The JOE Friday Pub Quiz: Week 265
Emergency services rush to high-rise building on fire in Tallaght
Ryanair is seeking applicants for "the worst job in Ireland"
Two prisoners who absconded from Loughan House in Cavan arrested by Gardaí
Hollywood couple Joe Manganiello and Sofia Vergara seen enjoying a Cork chipper
QUIZ: Can you master this General Knowledge Quiz?
A modern classic from Quentin Tarantino is among the movies on TV tonight
You may also like
1 year ago
Cardiologist's life saved thanks to the swift work of Dublin Airport's first responders
1 year ago
The dude with the broken stomach: Food, fitness and recovery from an eating disorder
2 years ago
The Chase star Paul Sinha has been diagnosed with Parkinson's disease
2 years ago
Senator proposes new legislation to change Ireland's drinking laws
2 years ago
It's official: Longford is the most fertile county in Ireland
3 years ago
OFFICIAL: Taking at least three weeks off work will help you live longer
Next Page