Leinster Rugby nutritionist Daniel Davey discusses the specifics of his job and his key principles when it comes to the diet of elite athletes.

This week, Daniel goes through exactly what his job entails and elaborates upon what makes up a typical week for him… if such a thing exists, of course.

Daniel speaks about the nutritional processes he goes through with individual players from when they enter the academy to when they join the first team and the differences between a player’s diet when they’re in training and when they’re in the off-season. 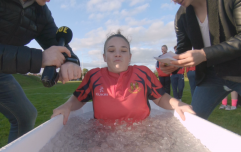 END_OF_DOCUMENT_TOKEN_TO_BE_REPLACED

Daniel also discusses the role of supplements in preparation and recovery and the various tests players undergo and performance targets they are given in relation to nutrition on a regular basis.

popular
Nearly 100 flights delayed at Dublin Airport on Monday
Motorcyclist in his 30s dies following two-vehicle collision in Kerry
QUIZ: Can you get top marks in this short but tricky Irish geography quiz?
Family of Ashling Murphy share heartbreaking tribute at Fleadh Cheoil
RTÉ tries to solve Michael Collins murder in new documentary
4-year-old girl killed in Sligo caravan park named as Alice Dunleavy
Grease star Olivia Newton-John has died, aged 73
You may also like
4 months ago
Scottish Parliament official dies during rugby game in Dublin
5 months ago
Every Guinness fan needs to try these brand new experimental beers
6 months ago
"Samaritans saved my life" - Brent Pope praised for honest interview on Tommy Tiernan Show
8 months ago
QUIZ: How well do you know these famous Ireland players?
1 year ago
"You want to prove them wrong, even if they're not telling the right story" - Conor Murray
1 year ago
Four Irish players propelled into Lions debate after England hiding
Next Page