The MyLife Step Squad challenge is officially over and the winner is... 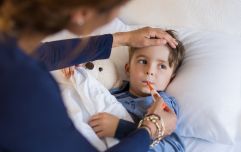 Are you a parent? It's more important than ever to get the flu vaccine for your child this winter

END_OF_DOCUMENT_TOKEN_TO_BE_REPLACED

In case you're only just joining us and have no idea to what challenge we're referring, let us explain. We recently participated in a Step Squad challenge where we asked all of you readers to join our Step Squad team and walk as much as you could for two weeks.

While you were walking, your steps were tracked on Irish Life's new MyLife app. It's the first app that gives you a single Health Score based on your body, mind, and lifestyle and aims to help you improve your wellness overall. You could track your steps with a fitness wearable (e.g. a Fitbit) or fitness app (e.g. Google Fit for Android or Apple Health for iPhone) connected to the MyLife app.

The JOE team walked an impressive overall average of  112,137 steps in the two weeks. However, the Her team finished up at 99,327 average steps per person at the end of the two weeks which meant we were crowned the 2019 champions of the MyLife Step Squad challenge.

All together, the two teams walked a massive total of 323,755,040 steps, which is impressive to say the least!

JOE aren't the only winners we have to announce though. There was also an individual winner to pick from each team.

So a huge congratulations to Karen Smith from the Her team and Rob McKinley from the JOE team. Both of these walkers clocked in more steps than anyone else on their team and, as a reward, they will both receive €500 (not a bad prize for a bitta walking!).

If you want to take some steps (literally) towards improving your fitness and overall wellness, you can download the MyLife app now for free on either Apple or Android.

Full T&Cs apply. MyLife by Irish Life Financial Services is available to download from the Apple and Android app stores.

House of Rugby Ireland · Murray & Sexton debate, France's Covid hell and James Tracy interview
popular
TOWIE star Mark Wright is officially the worst player on FIFA 21
Dublin beauty salon owner arrested after reopening for second consecutive day
QUIZ: Can you identify these world cities on a map?
Galway Lotto players urged to check their tickets for unclaimed December prize
The full list of all the new shows and movies coming to Netflix in March
Government looks set to abandon €9 substantial meal rule this year
10 years on, the ultimate example of Great Trailer Terrible Movie has yet to be topped
You may also like
12 hours ago
This lady’s moving story really shows how homelessness affects Irish children
1 day ago
Here are our picks of the new and classic shows coming to Star on Disney+
1 week ago
WATCH: This powerful new Irish ad really puts everything into perspective
1 week ago
First-time buyers in Dublin : This virtual First-Time Buyers Masterclass will kickstart your mortgage
3 weeks ago
Try your luck on this week’s €362 million* Mega Millions Super Jackpot for just €2*
4 weeks ago
First-time buyers in the midlands and Tipperary: This virtual First Time Buyers Masterclass will kickstart your mortgage
Next Page