It's official: Longford is the most fertile county in Ireland

Time to see how much riding is going on in your county.

Babies are a blessing and if you happen to be living in Longford, you're more likely to be hearing the patter of tiny feet and those high-pitched screams than in any other county in Ireland.

Why? Well, the O'Farrell County has the highest fertility rate in all of Ireland.

END_OF_DOCUMENT_TOKEN_TO_BE_REPLACED

The CSO has released new information on fertility rates in Ireland and during the period between 2011 and 2016, the total period fertility rate in the country has dropped from 2.02 to 1.81 (the figure represents the average number of children who would be born per woman they were to pass through the childbearing years bearing children according to a current schedule of age-specific fertility rates, explained in more detail here).

However, the highest fertility rate recorded in 2016 was found in Longford (2.25). Elsewhere, Cavan and Waterford County were in second place with 2.21.

All the other counties in Ireland in 2016 had fertility rates above the national average. 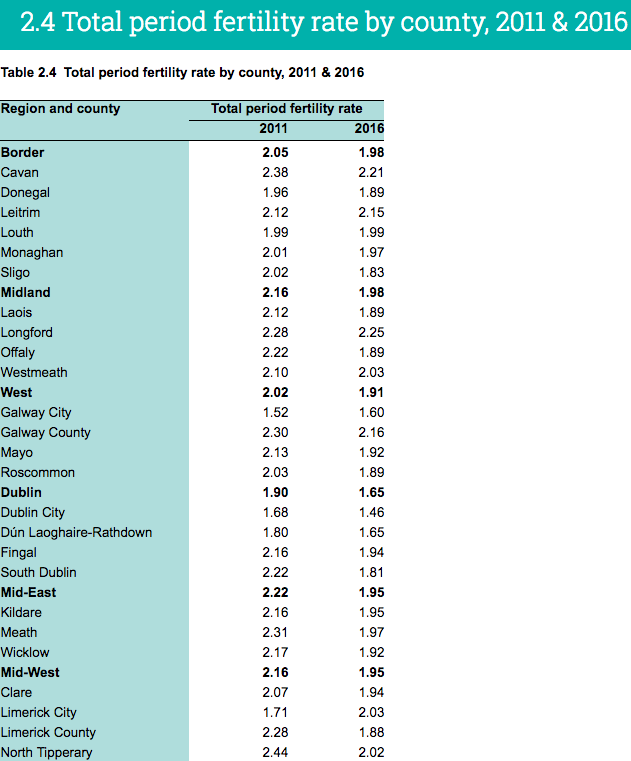 popular
QUIZ: Test your knowledge with this Ultimate Friends Character Quiz
Details of cash payments and Christmas bonus outlined in Sinn Féin’s alternative budget
The JOE Friday Pub Quiz: Week 313
House Of The Dragon is already better than Game Of Thrones
A brilliant psychological thriller is among the movies on TV tonight
One of the best films nobody went to see turns 15 years old this week
A brilliantly scary horror movie is among the movies on TV tonight
You may also like
3 days ago
Children under 16 can now stay in public hospitals for free
1 week ago
QUIZ: Name the counties where these Irish towns are located
1 week ago
250,000 women can get free contraception in Ireland from today
2 weeks ago
President leads tributes from Irish leaders following death of Queen Elizabeth II
3 weeks ago
Take a Hike: Galtymore and Cush Mountain Loop
3 weeks ago
New Irish website helps customers find cheapest flights to anywhere in the world
Next Page