One Irish doctor has a novel idea to stamp out childhood obesity; weigh the kids on their first day of school.

Do you remember your first day at school? The crying, the screaming, the big red face; you thought your mother would never go home and stop embarrasing you.

But now it has been suggested that a weigh-in could be part of the first day at school for Irish kids. Really.

At the IMO conference, Dr Edna Roche, consultant paediatric endocrinologist at Tallaght Hospital and head of paediatrics at Trinity College suggested the measure as a way to monitor if kids were already getting too big.

If they were found to be overweight, the kid could then be referred to their GP or an obesity specialist before things got too bad, hopefully saving the child, and the State, a lot of expense and hassle down the line.

The idea is being discussed by the HSE and it seems that some form of weight monitoring is about to become as normal a part of school life as snotty noses, untied laces and 40-a-side games of football.

Dr Clíodhna Foley-Nolan, director of human health and nutrition at Safefood, is quoted in the Irish Examiner as another advocate of the move, though perhaps not on the very first day in the education system. 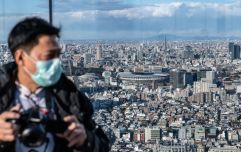 Japanese woman tests positive for coronavirus for the second time

END_OF_DOCUMENT_TOKEN_TO_BE_REPLACED

"I am not sure the first day of school would be the best time, but we need to monitor children’s weight," said Foley-Nolan, who went on to comapre any weigh-ins to eye tests or any other essential monitoring of young people's health.

Would this work? At four, there wouldn’t be any slagging but if the weigh-ins continue, Operation Transformation-style, as the kids get older then it could become an issue.

However with 20 per cent of 5-17 year olds overweight in Ireland, the problem has to be tackled. At least they're thinking about it.


popular
Dozens of Ireland's best landmarks to have free entry for first ever Tourism Day
Here's Week 21 of JOE's 19 in 90 quickfire quiz
Interactive infographic shows real-time spread of coronavirus outbreak
Ireland's best places to work for 2020 have been revealed
Met Éireann issues four separate weather warnings as Storm Jorge approaches
QUIZ: What movie/TV show are these fictional sports teams from?
Japanese woman tests positive for coronavirus for the second time
You may also like
3 weeks ago
QUIZ: Can you name all these bones in the human body?
3 weeks ago
Coronavirus declared global health emergency by World Health Organisation
4 weeks ago
"The world needs to be on alert now" - Head of WHO on the spread of the coronavirus
1 month ago
Chinese student who travelled from Wuhan in isolation in Waterford as precautionary measure
1 month ago
Coronavirus death toll rises to 80 as infection described as "much more contagious than originally thought"
1 month ago
'Drunk yoga' is a thing now, should you be interested
Next Page