We've heard of beer goggles, but this is ridiculous.

We know, we know. It's shocking news. We'd no idea these people were acting either. 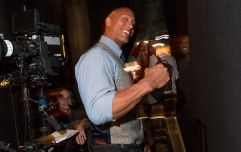 Pic: The Rock as a 16-year-old will leave you wondering what he was fed as a child

END_OF_DOCUMENT_TOKEN_TO_BE_REPLACED

New regulations are being proposed in an attempt to reduce the spread of sexually-transmitted diseases within the pornographic industry.

A 21-page draft, proposed by the state’s Division of Occupational Safety and Health, reportedly uses graphic language as it suggests how adult film performers can protect themselves from bloodborne pathogens and other bodily fluids, using condoms as a way to protect against HIV and other sexually transmitted diseases.

Adult film performers, however, aren't too enthused with the new proposed changes — which include wearing protective eye gear — claiming that the regulations would "make sex scenes look like medical dramas."

“These are regulations designed for medical settings, and are unworkable on an adult film set — or even a Hollywood film set,” said the CEO of the Free Speech Coalition, Diane Duke.

Hat-tip to The Metro

The Big Reviewski || JOE · Colm Meaney & his Pixie co-stars on deadly gangster priests, Irish accents & pickled onion crisps
popular
Harry Styles hits back at critics who told him to be more 'manly'
The JOE Friday Pub Quiz: Week 220
The JOE Movie Quiz: Week 80
The 50 most iconic songs of all time* have been revealed
What the hell is 'Stomp and Holler', and why does Spotify insist that you love it?
Status Yellow snow warning issued for five counties
Here's Week 58 of JOE's 19 in 90 quickfire quiz
You may also like
2 weeks ago
QUIZ: Can you name all the US States that contain 8 letters?
4 weeks ago
QUIZ: Can you name all the US states with a smaller population than Ireland?
1 month ago
QUIZ: Can you identify these US cities on a map?
1 month ago
Donald Trump’s drive-by greeting of supporters outside hospital described as “insanity” by hospital doctor
2 months ago
America the loser as Trump and Biden slug out pitiful draw
2 months ago
"Will you shut up, man!" - Trump and Biden scolded as first presidential debate turns ugly
Next Page