The research also said that the 'myth of the drunk Irish man' is inaccurate.

A recent report on global alcohol consumption has discovered that Irish women consume the seventh highest level of “average daily drinks” at 3.1 alcoholic drinks, while the drinking habits of Irish men compared quite favourably to other countries .

In fact, the author of the report, Dr Max Griswold, argued that "the myth of the drunk Irish man is likely incorrect".

END_OF_DOCUMENT_TOKEN_TO_BE_REPLACED

This being said, Irish men are also drinking to dangerous levels, consuming an average of 4.5 alcohol drinks daily. The medical research noted that while women may think that having one glass of wine isn't harmful - they are actually pouring themselves three measures.

In terms of the overall findings, the report states that alcohol is linked to 2.8 million deaths worldwide each year and the authors suggest that there is no safe level of alcohol.

The research, published in the Lancet, states that an average of one in three people, or 2.4 billion people, drink alcohol, including 25% of women and 39% of men.

2.2% of women and 6.8% of men die from alcohol-related health problems each year and it was the leading risk factor for disease and premature death in men and women between the ages of 15- 49 worldwide in 2016.

With regards to the methodology that was used, researchers analysed the impact of alcohol on 23 health conditions and alcohol-related risks on people between the ages of 15 and approximately 95 for the year 2016.

The highest average amounts of daily drinks for men were in Romania (8.2 units), Portugal and Luxembourg (7.2 units), and Lithuania and Ukraine (7 units).

For women, the highest numbers were found in Ukraine and Andorra (4.2), Luxembourg and Belarus (all at 3.4). Irish women were in seventh position. 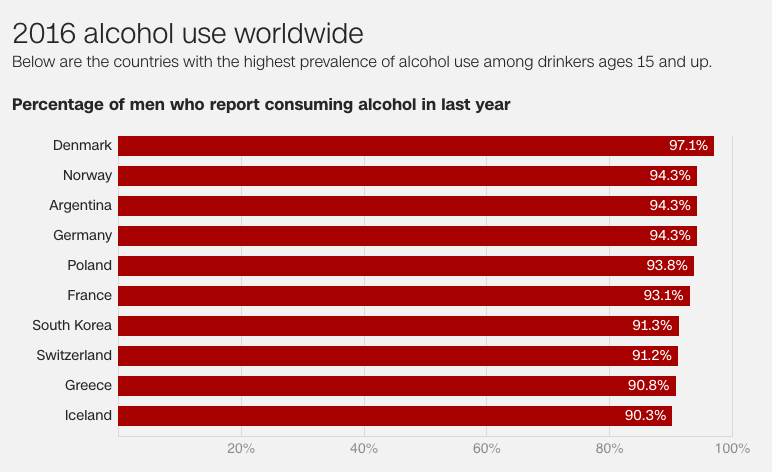 The Big Reviewski || JOE · The Big Reviewski with Y: The Last Man, that Malignant ending & a secret streaming service
popular
The JOE Friday Pub Quiz: Week 261
"Variable speed limits" to be introduced on the M50 in the coming weeks
Employers cannot ask staff to reveal their vaccination status, confirms Government
Miriam O'Callaghan had no patience for Stephen Donnelly's "gibberish" on Prime Time
Michael D Higgins cites "political statement" in decision to turn down Armagh ceremony invitation
One of the better Liam Neeson action romps is among the movies on TV tonight
The 50 most iconic songs of all time* have been revealed
You may also like
1 year ago
Cardiologist's life saved thanks to the swift work of Dublin Airport's first responders
2 years ago
The Chase star Paul Sinha has been diagnosed with Parkinson's disease
2 years ago
Senator proposes new legislation to change Ireland's drinking laws
2 years ago
It's official: Longford is the most fertile county in Ireland
3 years ago
OFFICIAL: Taking at least three weeks off work will help you live longer
3 years ago
Kevin Smith in fantastic shape as he loses 51 lbs, six months after having a massive heart attack
Next Page