The Mountain from Game of Thrones wins Europe's Strongest Man

The new series of Game of Thrones starts this Sunday, 14 April.

But one of the show's stars has already lifted his name into the headlines. Hafthor Björnsson, who plays The Mountain in the hit series, won Europe's Strongest Man this past weekend.

This means Björnsson has now lifted the European title on five occasions. Coupled with last year's triumph at the World's Strongest Man event, Björnsson is truly one one of the world's best.

When you look at some of the lifts The Mountain managed to put up, it's clear he's in a class of own. The Icelander managed to smash out 10 reps of a 350kg axle deadlift.

He also managed to keep the Giant Pillars of Hercules up for a seriously impressive length of time.

The Europe's Strongest Man event also featured special guests, such as powerlifter Larry Wheels. Wheels recently trained with Björnsson back in Iceland and the American also impressed on stage, lifting over 200kg in the log press.

The Mountain's diet is designed to fuel these world-record attempts and as such measures in at some 12,000 calories. 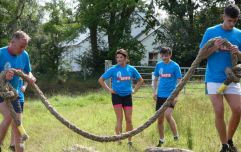 END_OF_DOCUMENT_TOKEN_TO_BE_REPLACED

Speaking about The Mountain's diet, Dr. Oliver Witard said: "A man of The Mountain's size should consume in the region of 70g of protein per meal. Björnsson consumes anywhere from a 50g midnight snack to 150g in the beef in his main meal.

"In normal young, healthy adults, 0.4 grams of protein per kilo of bodyweight per meal is sufficient to stimulate the muscle growth response -- the equivalent of a 6oz steak per meal."

popular
Video: So what exactly did John Terry say to Anton Ferdinand?
The JOE Movie Quiz: Week 80
QUIZ: Can you guess these European countries from their outlines?
QUIZ: How well do you know Elf?
Donald Trump paid $3 million for recount that uncovered more Biden votes
The JOE Music Quiz: Week 35
Gardaí search suspected shebeen in Kerry
You may also like
3 days ago
The full list of all the new titles coming to Netflix in December
5 days ago
Two brand new Mrs. Brown’s Boys Christmas specials are coming to your TV this Christmas
1 week ago
Here are the 11 best movies on TV this evening
1 week ago
QUIZ: Can you name all of these characters from The Crown?
1 week ago
QUIZ: How well do you remember The Boys v The Girls Trivia Contest on Friends?
1 week ago
QUIZ: Match The IT Crowd quote to the character who said it
Next Page