The Mountain from Game of Thrones proved he's the World's Strongest Man, again

He is almost as terrifying in real life. Almost.

In a video posted on his own Instagram account, he can be seen lifting what he claims to be "the heaviest deadlift ever done on an elephant bar". 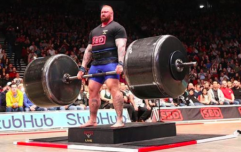 The Mountain from Game of Thrones wins Europe's Strongest Man

END_OF_DOCUMENT_TOKEN_TO_BE_REPLACED

We aren't gonna disagree with him.

He already holds the World Record for heaviest deadlift, and with this one being even heavier, that would mean that he's breaking his own record. Impressive stuff.

The only downside is that he appears to be working out at his home gym without any officials present to certify the achievement, though, so we're not sure if it will count in the record books officially.

Try telling him that, though.

He can be as strong as he wants, we'll never forgive him for what he did to Prince Oberyn Martell. The most disgusting TV death ever...

popular
Netflix has just quietly added 12 big movies to its library
Gardaí deny asking Cork shop to stop selling Animal Bars
HSE urges public to stop using popular e-cigarette
Wagatha Christie: Rebekah Vardy storms out of court just 30 minutes into final day
The 50 most iconic songs of all time* have been revealed
Man dies after being struck by lorry in Tipperary
QUIZ: Can you name all the US States that contain 8 letters?
You may also like
1 month ago
Netflix's answer to Game of Thrones has a very strong Irish connection
3 months ago
Ireland's new Game Of Thrones studio tour: A fitting monument to a staggering success story
5 months ago
Game of Thrones Studio Tour will open in Ireland in February 2022
5 months ago
"It has a Beauty & The Beast aspect" - Kristofer Hivju on his role in The Witcher Season 2
6 months ago
WATCH: The first 15 minutes of George R.R. Martin's video game are going to blow your mind
6 months ago
Ed Sheeran says Game of Thrones cameo backlash ruined the experience for him
Next Page