Video: This man tried to copy The Rock's monstrous 7 meals a day diet

Do you smell what The Rock is cooking?

Dwayne 'The Rock' Johnson is a man that likes to keep in shape, ridiculous shape.

While his film Hercules might not have been the most impressive things that we've seen, the rigorous diet that 'The People's Champion' undertook for the role was incredible. 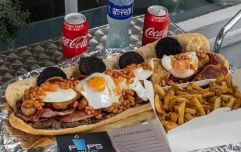 END_OF_DOCUMENT_TOKEN_TO_BE_REPLACED

The Fast and Furios 7 star feasted on an intense diet of grilled meats and steamed veggies.

While this might be enough to turn most people off food, Bo Jackson took it as a challenge.

This is what happens when a normal jabroni tries to emulate The Rock.

popular
Peter Kay moved to tears on stage while opening his first stand-up tour in 12 years
Simon Cowell concerns fans with appearance as they 'don't recognise him'
20 years ago, one of the best sci-fi movies of the 21st century was a box-office bomb
Boy, 1, eaten alive by 11-foot crocodile in front of dad on fishing trip
U2 drummer Larry Mullen Jr. says band may perform without him in 2023
Netflix has just added 30 big movies to its library
No, we've never heard of the new "best movie ever made" either
You may also like
1 week ago
Toblerone logo has blown people's minds and they can’t unsee it
1 week ago
Heinz Beanz pizzas set to make a return
2 weeks ago
Cadbury has made a major controversial change to your beloved Heroes tub
1 month ago
Vegan 'almost in tears' after eating Burger King nugget made of chicken
1 month ago
Grab your tickets for this very cool beer-tasting event, coming to Dublin later this month
2 months ago
QUIZ: How well do you know your ice-creams?
Next Page