...and it's excruciatingly painful.

Clenching while lifting is a very common problem in weightlifters. In order to enhance their performance, weightlifters sometimes tense up and recruit more muscles than necessary to lift weights for any given exercise.

According to a survey by Cerezen's Renew Health, Almost 81% of weightlifters said they clench their jaw when lifting weights. 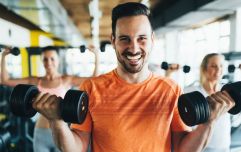 END_OF_DOCUMENT_TOKEN_TO_BE_REPLACED

There were 570 weightlifters surveyed to find out the effects of their training regime and one of the participants explained why this is a habit amongst weightlifters.

Robert Herbst, an 18-time world powerlifting champion said: ‘’ I clench my teeth together very hard when lifting heavy weights. By doing so, it allows me to activate the very strong muscles of my jaw and neck.’’

He recalls a very painful time in his career when the pressure he was applying became too much for his teeth; ‘’my lower right molar exploded under the enormous amount of pressure I was applying to my jaw during a world championship final. The dentist had to pull out the fragments, put a bone graft in my jaw and then, put in an implant.’’ 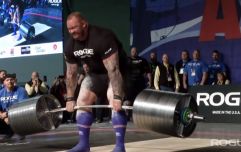 WATCH: The Mountain from Game of Thrones breaks his own world record by deadlifting 472kg

END_OF_DOCUMENT_TOKEN_TO_BE_REPLACED

Dentist and regular lifter, Samantha Sacchetti added that ‘’as someone who both lifts weights and sees the teeth of people who lift weights, teeth grinding and jaw clenching (also known as bruxism) during tasks of strength is a real phenomenon.

Her recommendation for combatting this habit is to have a "custom-made mouth guard mouth guard which cushions the impact and prevents the teeth from touching."

The dentist also said to "lift in front of the mirror and pay attention to the tension in your face" to "relax the facial muscles during sets" and to be aware of "pre-workout supplements as many contain high amounts of caffeine which can lead to even more clenching."

popular
One of the most underrated crime thrillers of recent years is among the movies on TV tonight
Shock as blues singer beats Adele, Beyonce and Taylor Swift to win Song of the Year Grammy
5 years ago, Hollywood took a massive gamble on a huge sequel... and lost big time
Netflix has just added 12 very big movies to their library
Ben Affleck's bored expression at the Grammys becomes a meme
QUIZ: JOE's Big News Of The Day Quiz #41
One of the best crime thrillers ever is among the movies on TV tonight
You may also like
7 years ago
VIDEO: The Mountain from Game of Thrones has once again completed 'Beast Mode'
7 years ago
Video: Someone has invented a very clever safety feature for the bench press
7 years ago
Video: Irish powerlifter rips muscle clean off the bone in horrific looking injury
7 years ago
Video: Strongman deadlifts world-record 462kg; leaves Arnold Schwarzenegger hanging for a high-five
8 years ago
Video: The Mountain from Game of Thrones breaks weightlifting record that stood for 1,000 years
8 years ago
Pic: Jaysus, Rory McIlroy lifts some pretty big weights when he does a leg day
Next Page