Ireland's favourite gaming console of all time has been revealed

The PS4, Xbox One or Nintendo Switch don't even make the top 10 here.

Maybe that is because Nostalgia Tinged Glasses have a stronger prescription than ever, or maybe it is because we have warm, fuzzy memories of just jamming a cartridge into a slot and playing a game immediately instead of having to buy the game, connect to the Internet, download the update, and then OHMYGODJUSTLETMEPLAYTHEGAME!

Anyways, the folks at D.I.D. ran a poll with a few thousand Irish customers, asking adults what was the greatest console that Santa ever brought them for Christmas, and the results are mildly shocking:

We're not fully sure of how this vote worked out, but we have to say that the PS2 was unquestionably the greatest console to ever exist.

Maybe there was a cut-off year, so the PS2 couldn't be counted? Or maybe it isn't far enough in the past for nostalgia to have kicked in yet?

The PS2 gave us Shadow of the Colossus, Grand Theft Auto III, Resident Evil 4, Metal Gear Solid 2, Ico, Silent Hill 2, God of War II, Prince of Persia: Sands of Time... and we could go on and on and on. 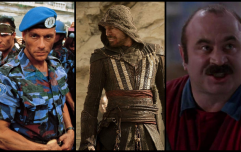 QUIZ: How well do you know these video game movies?

END_OF_DOCUMENT_TOKEN_TO_BE_REPLACED

Either way, the PS1 topped the charts, which is probably a good thing considering that the PlayStation Classic is the big must-buy present for Christmas this year (our review here), but we don't have any nits to pick with the poll results for the greatest handheld gaming device:

Yep, you can keep your Nintendo Switch, long live the Gameboy!

(Note: If you would like to give me a Nintendo Switch, that is totally fine, and thank you.)


popular
Sinn Féin announce a series of public rallies to take place in five counties
QUIZ: How many of these Derry Girls characters can you name?
Met Éireann issue rainfall warning for 19 counties, with a side of snow
QUIZ: Can you name the Sega Mega Drive game from the screenshot?
How well do you remember these classic PlayStation 2 games?
The JOE Friday Pub Quiz: Week 179
Met Éireann predicting snow this weekend and well into next week
You may also like
1 week ago
"When I try explain my job... people look at me like I've got three heads!"
1 month ago
The EA SPORTS™ FIFA 20 Team of the Year has been revealed
1 month ago
Here are the 10 games we're most excited to play in 2020
1 month ago
10 of the most unforgettable video game moments of the past decade
2 months ago
QUIZ: Tell us the name of these PS1 games from their screenshots
3 months ago
It looks like a sequel to the fantastic Horizon Zero Dawn is finally on the way
Next Page