That game that was all over Twitter and TikTok this week is here.

There is a lot to be said for introductions, and how much time and effort you should invest into media. How many pages or chapters do you give a book before you check out? How many episodes of that new Netflix show? How many tracks off that new album before you realise that this just isn't for you?

When people argue in favour of the things that they like but you don't, they'll often recommend a shortcut to get to the good stuff. Skip the first season, listen to these songs, etc. But that isn't the case for games, where people might tell you "Once you get through the boring bit, then you'll start having fun..." But who wants to play a boring game? We're paying €80 for this, shouldn't we be having fun immediately??

END_OF_DOCUMENT_TOKEN_TO_BE_REPLACED

We gamers can forgive a lot, especially if we're sufficiently distracted, and Forspoken does a great job at being distracting. Initially, the visuals are absolutely gorgeous, really feeling like they're pushing what next-gen consoles are truly capable of. The traversal feels unique, allowing for speedy and fluid movement across the huge landscape. The action takes the high-particle count of Ratchet and Clank: Rift Apart and pours it into fighting against creatures great and small that feel like they'd fit well within a Monster Hunter game.

But it doesn't take long for these positives to fall quickly away, as Forspoken goes out of its way to actually stop you from playing the game... to stop you from having fun!

Within the first two hours of gameplay, there were so many aggressively sudden stops to gameplay, that there was no time to build any momentum towards having any fun. At one point, during what turned out to be yet another unskippable cut scene - during which, by the way, you can't save the game, so you have to endure them just to make sure you don't have to watch them again when you return - I found myself literally shouting at the screen: "JUST LET ME PLAY THE GAME!" 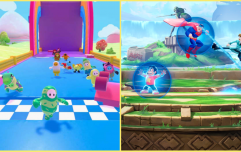 END_OF_DOCUMENT_TOKEN_TO_BE_REPLACED

There has already been a lot of discourse online about the scripting and the performances, which genuinely aren't terrible, but often take a sharp turn into purely boring. The world you find yourself in could be interesting, but the world building is painfully generic and filled with dialogue that has you mercilessly smashing the skip button.

The basic premise of a character being warped from our real world into a magical one being destroyed by some form of corruption, and only she - with the help of a sentient bangle - can save the day. So, yes, it is Alice In Wonderland... but with more hyper parkour and less originality. And yes, if you do power through the initial slog, the game does get more fun, but never more interesting. As the fun goes up, the potential for the game goes down, so you're left with a bit of a flatline.  Not the worst game ever, but almost immediately one of the most forgettable.

Forspoken is available on PlayStation 5 and PC right now.