The winner of 2022's Game of the Year has been revealed

Also, a ton of new games were announced at the awards show.

The end of the year is swiftly approaching, a time when award bodies and institutions in the arts and entertainment sector begin to take stock of the previous 12 months and all the best releases.

In keeping with this, The Game Awards - an annual awards ceremony honoring achievements in the video game industry - took place in Los Angeles on Thursday (8 December) and saw action role-playing game Elden Ring crowned Game of the Year.

The moment you’ve all been waiting for, Game of The Year! A massive congratulations to @ELDENRING for their big win! @fromsoftware_pr #TheGameAwards pic.twitter.com/3042IRMEcm

However, the team behind Elden Ring had their Game of the Year victory speeches partly overshadowed by a stage crasher who stood with the developers before taking the microphone briefly.

The Game Awards' creator and host Geoff Keighley wrote on Twitter that the man was later arrested.

The individual who interrupted our Game of the Year moment has been arrested.

Another big winner on the night was the action-adventure game God of War Ragnarök, which walked away with trophies in six categories - the most of any 2022 game. 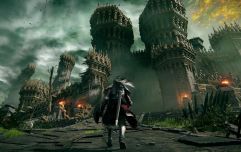 END_OF_DOCUMENT_TOKEN_TO_BE_REPLACED

These included in the categories Best Narrative, Best Action/Adventure Game and Best Performance - with actor Christopher Judge winning the latter for his role as the game's protagonist Kratos.

Also at the event, a number of new games were announced, including sequels to the popular titles Death Stranding and Hades.

Meanwhile, Idris Elba was confirmed to be joining Cyberpunk's 2023 expansion and the first full clip for The Super Mario Bros. Movie premiered.

You’ve never seen the Mushroom Kingdom quite like this! Join Toad & Mario for an exclusive look at the big city! #SuperMarioMovie pic.twitter.com/1SLw5PkenM

The full list of winners for The Game Awards 2022 can be found below.

Game of the Year - Elden Ring

Games for Impact - As Dusk Falls

Most Anticipated Game - The Legend of Zelda: Tears of the Kingdom

popular
Conor Mcgregor hit by car ‘at full speed’ while cycling
New Netflix series deserves to be as big as Stranger Things
The JOE Friday Pub Quiz: Week 331
Couple left mortified after best man delivers incredible punchline during speech
Colin Farrell shouldn't win the Oscar this year
Peaky Blinders creator on the lookout for 'skinheads' for new drama
All of the new Netflix movies and shows arriving in February
You may also like
1 year ago
WATCH: The first 15 minutes of George R.R. Martin's video game are going to blow your mind
2 months ago
Gears of War creator has specific actors in mind to star in the Netflix film adaptation
2 months ago
'I get choked up thinking about it' - God Of War Ragnarok creators on the sequel's biggest moments
2 months ago
God of War Ragnarok proves it's hard to improve on near perfection
2 months ago
The free subscription games coming to PlayStation and Xbox in November
2 months ago
IKEA threatens legal action against new horror game The Store Is Closed
Next Page