All those fears of the game being pushed to 2023 can finally be put to rest.

That was a close one!

For months and months, there have been rumours that Sony might push its most-anticipated game from 2022, and the long, LONG silence of confirmation around an actual release date only made gamers and fans all the more antsy.

END_OF_DOCUMENT_TOKEN_TO_BE_REPLACED

Today, finally, those fears can be put to rest, as a new cinematic trailer for God of War Ragnarök has given a concrete release date – and it is still very much arriving this year!

Four years since the award-winning, massively-selling, critically-adored first God of War game (at least in this new Norse setting), we will continue to control Kratos, paired with his sharp-shooting son Atreus, in the new adventure.

The official game synopsis is as follows:

"Join Kratos and Atreus on a mythic journey for answers before the prophesied battle that will end the world. All the while, the eyes of Asgard watch their every move..."

END_OF_DOCUMENT_TOKEN_TO_BE_REPLACED

God of War Ragnarök will arrive on PS5 and PS4 on Wednesday, 9 November. Check out the new cinematic trailer right here:

Additionally, the God of War Ragnarök Collector's Edition & Jötnar Edition was also revealed, which will be available to pre-order from next week.

JOE has reached out to PlayStation Ireland for specific information on this special edition release in terms of pricing and availability for Irish players, and will update accordingly.

The Jötnar Edition will include:

Also included in the Collector’s Edition are the following digital items: 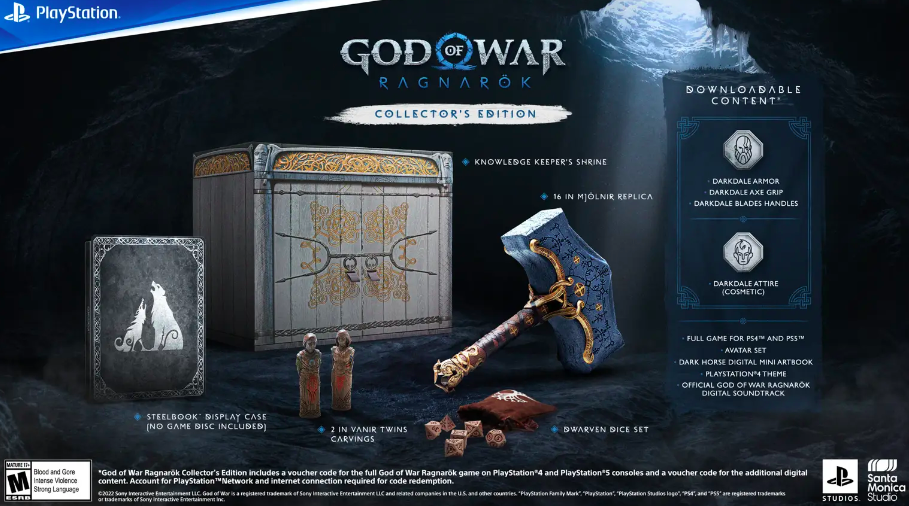 popular
The JOE Friday Pub Quiz: Week 307
Man in his 40s dies following fatal assault in Westmeath
QUIZ: You'll need to be razor-sharp to get 100% in this General Knowledge Quiz
Salman Rushdie likely to lose an eye following stabbing in New York
A great underseen action thriller is among the movies on TV tonight
Disney+ has just added 10 big movies to its library
An exciting Irish crime thriller is among the movies on TV tonight
You may also like
1 week ago
The JOE Friday Pub Quiz: Week 306
2 weeks ago
JOE Gaming Weekly - Stray has the highest user-review score of 2022 so far
2 weeks ago
GTA 6 will reportedly be based on a modern day "Bonnie & Clyde"
3 weeks ago
WATCH: The new Gotham Knights trailer shows off Batgirl in vicious action
3 weeks ago
JOE Gaming Weekly - FIFA 23 will feature women's club teams for the first time ever
4 weeks ago
PlayStation confirms 17 games coming to PS Plus in July
Next Page