It was a lesson learned from two of the biggest sequels in video game history.

BIG SPOILERS for God Of War Ragnarok from this point on...

When Metal Gear Solid 2 arrived for players back in 2001, it came as a total shock when the series' hero Solid Snake was shunted to a supporting character, and you were left controlling Raiden for the vast majority of the campaign.

END_OF_DOCUMENT_TOKEN_TO_BE_REPLACED

When The Last Of Us Part II arrived in 2020, players had a very strong reaction to no longer controlling Joel, initially only playing as Ellie, before then switching sides and playing as Abbie.

The idea of swapping out our playable protagonists - and keeping it a secret - is a tricky balance, and one that the creators of God Of War Ragnarok are faced with, as several major missions of the blockbuster sees the player no longer controlling Kratos, but instead playing as his son, Atreus.

In the run-up the game's release, JOE chatted with Erica Pinto (Lead Narrative Animator) and Bruno Velazquez (Animation Director) about the sequel, including the game's most memorable moments for them.

END_OF_DOCUMENT_TOKEN_TO_BE_REPLACED

When faced with keeping that secret of playing as Atreus, and then making sure the character was as fun to play as Kratos is, we asked was that a daunting prospect?

Bruno told us the following:

"We definitely wanted to keep a lid on it. So that's definitely something that as you see in all the marketing and everything that we talked about, we haven't really mentioned it. And because we wanted the player to be surprised and we didn't wanna show all our cards.

"And not because we were not excited or proud of what we accomplished with Atreus, but we definitely wanted to ensure that people were surprised. 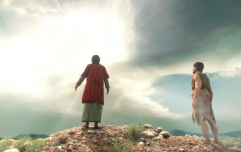 END_OF_DOCUMENT_TOKEN_TO_BE_REPLACED

"We definitely know that people are here mainly because they want to play as Kratos, right? We understand that, so I feel like in the end we struck a very nice balance between allowing you to play as Atreus, but also giving you enough of Kratos.

"It's funny that you mentioned the Metal Gear game because I felt like that one was almost too much of a surprise, and in the end people were really left hoping that they could play more as Snake, whereas I don't feel like that's gonna be something that people will feel after they complete God Of War Ragnarok."

Erica then told us the following:

"Yeah, I feel like over the years, we've explored a lot about Kratos. But I think with the last game we introduced Atreus, and it kind of almost feels like a natural transition of 'Now we have this character, we want to learn more about him.' So I think being able to be Atreus and explore who he is as a person and especially with this story of growing up as a teenager and becoming your own person, that identity exploration is an important part.

"So what better way to do it than as that person? And I think being able to give Atreus his own skill tree and zone unlockables, it helps really to just flesh out that character, and it's not just a trivial little side quest."

"Yeah, I think, Erica, you nailed it when you mentioned that from a narrative standpoint, Kratos is not gonna experience it the same way that Atreus is experiencing it. This way so that you get a completely different perspective and you get to really see Atreus is just being a teenager, being a kid, right?

"There's no way we can depict that through the eyes of Kratos. So this is why we knew that this was a natural progression, and it also enhances the story. So it all around is just fun to play, and that's our goal, right? Making it fun to play but also to help enhance the story."

And Erica ends us with an on-set anecdote:

"I gotta say it was a little interesting the first time we were on set and Chris Judge [the actor who portrays Kratos] wasn't there, and we were like 'Whoa, what is this??' But it was fun, it was refreshing, but also when they were all together, it felt like a family reunion. So it was just great having all those different experiences."

God Of War Ragnarok is available on PS5 and PS4 right now.

popular
One of the best movies of the decade has just been added to Netflix
Surprise frontrunner emerges as potential next James Bond as producers 'love him'
20 years ago, one of the best sci-fi movies of the 21st century was a box-office bomb
One of the scariest films of all time is among the movies on TV tonight
Katherine Ryan says famous TV star is a ‘predator’ and everyone in industry knows
Katherine Ryan shares harrowing truth about media coverage of ‘famous TV predator’
Very popular US fast food chain planning to open in Ireland
You may also like
1 week ago
The six finalists for Game Of The Year have been revealed
2 weeks ago
'I get choked up thinking about it' - God Of War Ragnarok creators on the sequel's biggest moments
2 weeks ago
Man makes VR headset that kills the user if they die during game
3 weeks ago
God of War Ragnarok proves it's hard to improve on near perfection
3 weeks ago
The free subscription games coming to PlayStation and Xbox in November
3 weeks ago
IKEA threatens legal action against new horror game The Store Is Closed
Next Page