WATCH: The Viper gets his hands on Battlefield V

"Look at this guy, sleepy time!"

While we were certainly fans of Battlefield V, it wasn't the only opinion you needed to hear. The best man for the job was always going to be Castletown native Francis "The Viper" Higgins.

END_OF_DOCUMENT_TOKEN_TO_BE_REPLACED

Since he first slithered onto our screens with the other Hardy Bucks, The Viper has been leading the way in gameplay reviews. Nowhere else will you find the kind of in-depth analysis he provides.

We certainly never knew until watching this video that the Germans wanted to call the Second World War "World War 2: Lost in New York." Every day is a school day.

To test out the latest edition in the iconic series, The Viper sunk his fangs into Battlefield V. The beautifully-rendered battle scenes before him reminded the Viper of the stories his uncle, Private Shlug of the 38th Irish Brigade, told of the war. 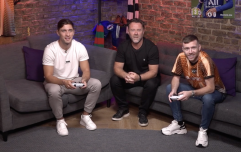 END_OF_DOCUMENT_TOKEN_TO_BE_REPLACED

Private Shlug's tales would be better heard from the horse's mouth. You certainly won't find such harrowing tales of war anywhere else.

Set in World War Two, Battlefield V is available now to buy online and in stores nationwide. With jaw-dropping graphics, a detailed single-player campaign and massive multiplayer maps, it's the most ambitious Battlefield game to date.

popular
Netflix has just added an incredibly tense 97-minute thriller
Irish person dies after drowning in Spanish resort swimming pool
A county-by-county breakdown of the average rent in Ireland as rent inflation reaches record high
Nearly 100 flights delayed at Dublin Airport on Monday
18 counties hit with weather warning as temperatures set to reach 29 degrees
QUIZ: Can you get top marks in this short but tricky Irish geography quiz?
WhatsApp introduces way to choose who can and can't see you're online
You may also like
17 hours ago
5 must-watch shows and movies streaming on NOW in August
5 days ago
Planning your next adventure? Here are 7 Irish attractions you need to visit this summer
1 week ago
The Resort is the new must-watch for fans of big murder mysteries
1 week ago
COMPETITION: WIN a €700 voucher for Big Style Watersports in Mayo
2 weeks ago
3 simple ways to help the men in your life open up, according to an Irish therapist
2 weeks ago
COMPETITION: WIN an overnight stay in Belfast and two V.I.P attraction tickets
Next Page